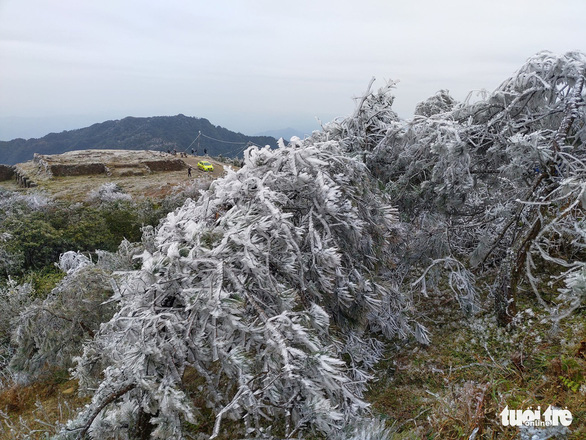 The bitterly cold weather is here to stay in northern Vietnam, with chances of temperatures below 0 degrees Celsius in mountainous areas, whereas people of the Mekong Delta are facing another wave of saltwater intrusion.

The continuation of cold weather is anticipated by the National Center for Hydro-Meteorological Forecasting.

As of Sunday morning, Hanoi’s Ha Dong District had seen temperatures of 10 degrees Celsius, while those in various northern upland locations dropped to one digit or lower, with Mount Mau Son of Lang Son Province recording minus two degrees Celsius and Sa Pa Town minus 0.7 degrees Celsius.

“The northern region will see cold weather in tandem with low humidity, with sunlight during the day and biting cold at night," Lam remarked.

"Meanwhile, frost will recede due to the sunlight.

"In the early morning and during the daytime on Monday, sleet might occur on the Hoang Lien Son mountain range."

The central provinces from Ha Tinh to Thua Thien – Hue will encounter temperatures of 9-12 degrees Celsius, while those from Da Nang to Quang Ngai will see mecury readings of 15-18 degrees Celsius.

The Central highlands will also witness cold weather at night and early in the morning.

In a similar fashion, southern provinces will see dry, mildly cold nights and from January 10 to 17.

The cold might sustain until the early morning, which will then recede as the sun rises.

Threats of saltwater encroachment are on the rise in Vietnam’s Mekong Delta region, with saline water levels expected to peak between January 14 and 16 before falling off gradually.

The highest salinity level recorded at monitoring stations in the area is still lower than the peaks witnessed in early 2020, with affected areas spanning a length from 35 to 55 kilometers.

It is anticipated that saltwater intrusion this year will be more severe than average, but not as extreme as the historical occurrence in early 2020.

Waves of peak saline water encroachment at inlets of the Mekong Delta are expected to take place in February or March, except for the Vam Co River and Cai Lon River, which may hit peak levels around March or April.