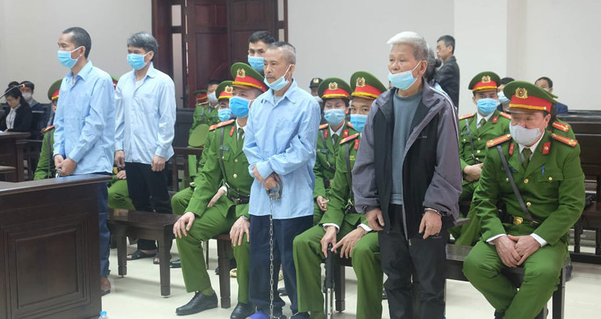 The high-level People’s Court in Hanoi has upheld capital punishment and jail terms handed down to six defendants for causing the death of three police officers in Dong Tam Commune last year.

The court on Tuesday rejected the appeal of the six defendants who were previously convicted of “murder” and “obstructing on-duty officers.”

During the first-instance trial in mid-September 2020, the Hanoi People’s Court sentenced Le Dinh Cong, 57, and Le Dinh Chuc, 41, to death for murder.

Le Dinh Doanh, 33, was given a life sentence, while Bui Viet Hieu, 78, and Nguyen Quoc Tien, 41, were condemned to 16 and 13 years in prison, respectively, for the same offense.

More than 20 other defendants were also given sentences of between 15 months of probation and six years in prison for obstruction during the first trial.

Cong, Chuc, Doanh, Hieu, Tien, and Noi later filed their appeal, stating that their penalties were too harsh.

According to the indictment, a man named Le Dinh Kinh, along with multiple other individuals, established the so-called ‘group of consensus’ on Dong Tam Commune in 2003 to trick local residents into claiming land illegally, slandering the government, and disturbing public order.

The group also posted video clips and live-streamed their complaints on social networks, threatening to bomb power stations and kill 300 to 500 police officers.

On January 9, 2020, police officers entered Hoanh Village in Dong Tam to carry out their missions and were attacked by members of the ‘group of consensus,’ who were armed with petrol bombs, grenades, and knives.

Cong, who was among the key members of the group, directed and contributed money to buy petrol and grenades, guided others how to make petrol bombs, and directly threw the explosives toward on-duty officers.

Chuc and Doanh then poured gasoline into the pit and killed the officers by setting them on fire.

At the trial of the second instance on Tuesday, the jury stated that the defendants’ actions were dangerous to society and left behind very serious consequences, thus stern punishments were necessary.