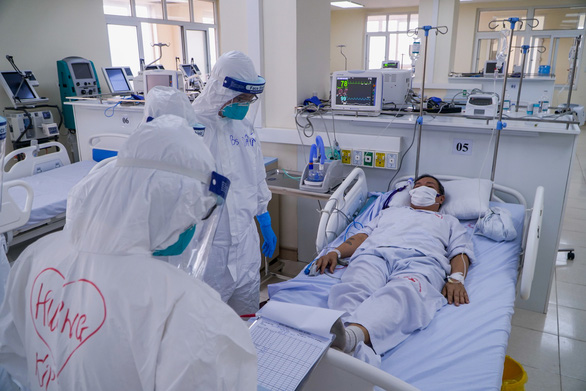 Vietnam has confirmed the decease of four more patients with serious underlying health conditions as its latest COVID-19 fatalities since the pandemic hit the country early last year.

The National Steering Committee for COVID-19 Prevention and Control on Monday morning announced the four deaths, numbered from 120th to 123rd, of which three were in Dong Thap Province and the other in Long An Province.

The 123rd death was a 67-year-old woman in Long An’s Can Duoc District, who was taken to Long An General Hospital after testing positive for SARS-CoV-2 on June 29.

The patient, with a history of decompensated cirrhosis, hepatitis B, and heart failure, was diagnosed with COVID-19 pneumonia.

Despite receiving various therapies, the woman’s health conditions got worse and she died on July 9.

The 122nd victim was a woman of Dong Thap’s Sa Dec City, who was admitted to Sa Dec Hospital with the diagnosis of severe pneumonia, based on the history of grade-3 heart failure, hypertension, ischemic heart disease, and stage-5 chronic kidney failure.

The patient deceased at 48 years old on July 8 due to progressive respiratory failure, a complication of severe SARS-CoV-2 pneumonia, along with acute myocardial infarction.

Another death on the same day was a 74-year-old man, another native of Sa Dec, who had a history of grade-3 heart failure, hypertension, type-2 diabetes, stage-2 chronic kidney disease, and coronary artery bypass grafting.

The patient was also taken to Sa Dec Hospital for treatment of severe pneumonia caused by coronavirus infection.

The 120th fatality was a man, also from Sa Dec, with a history of pleural cancer and cirrhosis, who died at 44 years old also last Thursday, after being hospitalized for treatment at the same hospital.

The death’s cause was progressive respiratory failure as the complication of serious COVID-19 pneumonia, doctors said.

In a report issued on Monday noon, the Ministry of Health recorded 1,112 new coronavirus cases, including 1,105 domestic and seven imported cases, which have taken the country’s patient count to 31,590, including 9,275 recoveries and 123 deaths.

Among the latest cases, 879 were recorded in Ho Chi Minh City, which has so far documented over 14,000 patients.

Since April 27, when the pandemic’s fourth wave erupted in Vietnam, the country has logged 28,086 domestic infections.