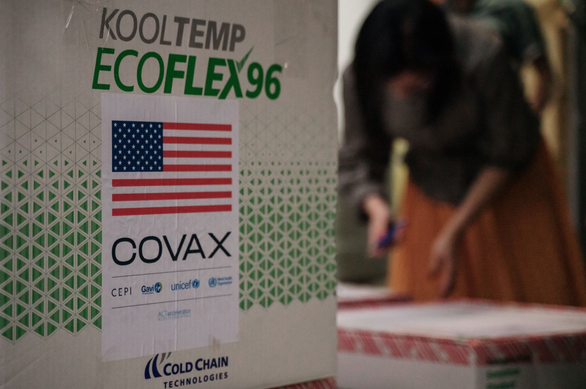 The U.S. gave an additional one million doses of Moderna COVID-19 vaccine to Vietnam on Wednesday, bringing the total number of shots donated to the Southeast Asian country by the U.S. to over 16 million jabs.

“Another 1 million Moderna COVID-19 vaccines donated by the United States have just arrived in Hanoi!” the U.S. Embassy in Vietnam announced on its verified Facebook page on Wednesday.

The embassy emphasized that the two countries will continue working as partners in combatting COVID-19 and ‘building back better.’

“We have provided more than 16 million COVID-19 vaccine doses to Vietnam, and as always, they come with no strings attached,” the embassy said.

The U.S. has provided COVID-19 vaccines to Vietnam on a continuous basis for the past several months, with the preceding donation of 350,000 doses of Pfizer-BioNTech vaccine arriving in Ho Chi Minh City on November 8.

The U.S. has committed $30.2 million to Vietnam’s efforts to cope with the health crisis since it began early last year, the embassy said.

On September 22, U.S. President Joe Biden announced an additional 500 million Pfizer-BioNTech doses to 92 low- and middle-income countries around the world and the African Union, bringing its total global commitment to more than 1.1 billion doses.

“Vietnam has been a leading recipient of these doses,” the embassy said in a statement on October 25.

Washington had provided more than 200 million doses of COVID-19 vaccines to more than 100 countries around the world, the U.S. Agency for International Development (USAID) said in a press release last month.

Though the U.S. has been the largest donor of COVID-19 vaccines to Vietnam, the Southeast Asian country has also received vaccine donations from Japan, Australia, the UK, France, Italy, Russia, the Czech Republic, China, and several other nations.

Vietnam’s Ministry of Health has so far approved nine vaccines for emergency use in the country, including the UK’s AstraZeneca; China’s Sinopharm; Russia’s Sputnik V; the UAE’s Hayat-Vax; Cuba’s Abdala; India’s Covaxin; the U.S.’s Pfizer-BioNTech, Moderna, and Johnson & Johnson.

The country, with a population of 98 million, has received more than 136 million COVID-19 vaccine shots of the 200 million jabs it had contracted, according to the health ministry.

By Wednesday, health workers had administered a total of 65.22 million first vaccine shots and 36.8 million second jabs since the country began its inoculation campaign in March, the ministry reported.

Since erupting in Vietnam in early last year, health officials have detected 1,055,246 positive cases, including 874,870 recoveries and 23,337 deaths.

Recently, daily infections in the nation began to gradually increase after a month of sharp decline, though mortalities have dropped significantly, to 67 on Wednesday from 212 two months earlier, according to the ministry’s data.