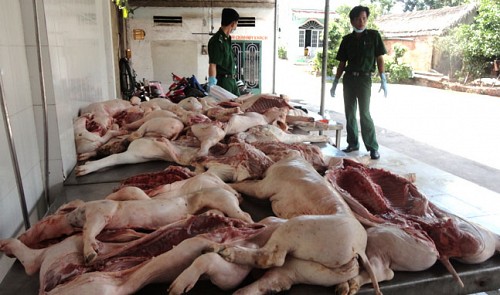 The Thu Duc Animal Quarantine Station and the Rach Chiec Traffic Police Team in Ho Chi Minh City have seized over 600 kg of spoiled rotten pigs carried in a coach that had departed from central Quang Ngai Province. Early on Monday morning quarantine staff at the station and police officers stopped a suspicious coach for examination and caught it carrying 10 cartons containing 76 suckling pigs and pig organs weighing 612 kg in total. All of the pigs were stinking and spoiled and the coach’s driver, Nguyen Tang Dieu, 38, of Quang Ngai, failed to show law enforcers any documents related to the goods. However, there were quarantine marks with No. 35007 stamped on the body of the pigs by the Quang Ngai Province Sub-department of Veterinary. Dieu told investigators that he had been hired by a trader in Quang Ngai to transport the goods to the Eastern Bus Station in Binh Thanh District, HCMC. The station made a report and seized all of the rotten pigs and organs for incineration and take samples for testing. So far this year, there have been at least three cases of transporting poor quality pigs or pork from Quang Ngai to HCMC, and all of the samples tested positive with blue ear disease, the station reported. These cases are among a series in which poor quality pigs, pork, animal organs, and poultry have been transported, mostly without documents, from other localities to the city over the past several months, the city Veterinary Department said.

On May 21, the station and a traffic police unit caught a bus carrying 320 kg of pork which was rotten and stinking and had blood under the skin.

The bus driver failed to show any documents related to the meat and the station seized all of the pork for incineration and took samples for testing. On May 19, the Binh Thanh Veterinary Station caught a tricycle carrying 190 kg of pig breast without documents. As most of the goods were rotten and stinking, the station confiscated them for incineration.  On May 9, a bus was caught by the station and police transporting 1,106 kg of dead pigs stored in 16 large bags from Dong Nai Province. Samples of the pigs tested positive for blue ear disease. On May 6, the Thu Duc Animal Quarantine Station caught a refrigeration truck carrying 6,800 kg of piglets stamped with the slaughtering control seal of the Thai Binh Province Veterinary Sub-department. However, after examination and testing, the station surprisingly discovered that the samples of the pigs were infected with viruses that caused blue ear disease.