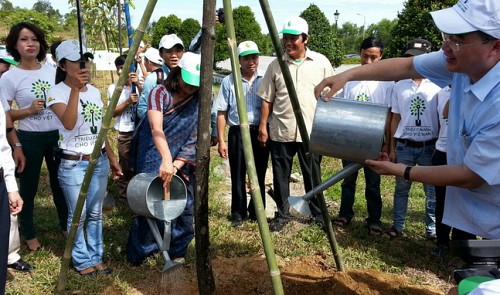 Vietnam is facing big environmental problems caused by human activity, with 60 percent of waste discharged into the environment without treatment, an official has warned, while calling for efforts to address the challenge.  Deputy PM Nguyen Thien Nhan released the warning at a meeting held in Thua Thien-Hue Province on Wednesday to mark World Environment Day (June 5). Authorities at all levels must work out plans to prevent household waste from being discharge randomly and without control, as at present, Nhan said.   Hundreds of tons of rice straw are burnt across the country every year to make fertilizer, contributing to polluting the environment, according to a report from the agricultural sector.  Therefore, Nhan said, the sector should advise farmers to treat straw with proper agents to make fertilizer instead of burning it, to minimize pollution problems. In order to increase green coverage, he also asked the Ministry of Education and Training to launch a campaign to call on each grade-12 student to plant a tree before their graduation. More than 60 percent of rural household waste and 16 percent of urban household waste has not been collected for treatment. In addition, over 60 percent of the 1 million tons of waste produced by industrial parks nationwide has also been being released directly into the environment without any treatment. In the 2006-2012 period, Vietnam lost nearly 5,000 hectares of forest, of which 3,000 hectares were set on fire, and the rest was cut illegally. For their good performance in activities to protect the environment and promote green development, 31 organizations, 18 individuals and one community were given 2012 Environmental Awards at the meeting. Also, yesterday morning the deputy PM and Minister of Natural Resources and Environment Nguyen Minh Quang attended a ceremony held in Quang Trung Park  at Ban Mountain in Hue City, during which Vfresh, owned by Vinamilk, presented 20,000 seedlings to a representative of Dien Mon Commune, Phong Dien District. The donation was part of a program called “Fund for One Million Green Trees for Vietnam”, which has been organized by Vinamilk and the Vietnam Environment Administration since 2012. The Fund has earlier presented 70,000 seedlings to many other provinces and cities, including HCMC, Hanoi, Hai Phong, Da Nang, Quang Ninh and Quang Nam.

​Craft beer and BBQ in the mountains in Vietnam

We were greeted in Langbiang (about 14 kilometers north of Da Lat) by James Reelick, originally from Connecticut in the USA

Internet users, businesses, and the government are advised to work together to improve the country’s cybersecurity