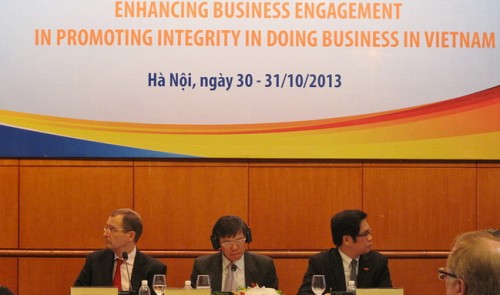 Most businesses in Vietnam choose to pay bribes

Six out of ten businesses operating in Vietnam admit they must pay costly ‘unofficial fees,’ and yet most of them choose to pay under table through their own initiative.

The revelation was made by deputy chief inspector Tran Duc Luong at a workshop seeking to enhance business engagements by promoting integrity in Hanoi on Wednesday.

Luong said most businesses in Vietnam are small-sized enterprises that lack a professional administrative management basis, and thus “pay inadequate attention to the need of following the transparency code of conduct in relationships with regulatory agencies and partners.”

The deputy chief inspector said 60 percent of businesses criticize the exorbitant ‘unofficial money’ they must pay.

“Thirty percent say they have to pay bribes following officials’ extortions or requests, while 70 percent admit they do it without being asked,” Luong said.

Speaking at the event, British Ambassador to Vietnam Antony Stokes wondered if it is really necessary to bribe to be successful in Vietnam.

And the answer, according to what he learned from two similar workshops previously held in Da Nang and Ho Chi Minh City, is that it is indeed “not necessary,” Stokes said.

Many businesses shared their policies and initiatives to fight against corruption during the Da Nang and HCMC conferences, he added.

The “Enhancing business engagements by promoting integrity in doing businesses in Vietnam” workshop is co-organized by the State Inspectorate of Vietnam, Vietnam Chamber of Commerce and Industry, and the UK Embassy in Vietnam.

It is held in preparation for the annual anti-corruption talk to be hosted on November 12.

The workshop will convene again on November 1 to give businesses an opportunity to voice their opinions regarding the issue.

Local authorities have supported the trend by promulgating special policies