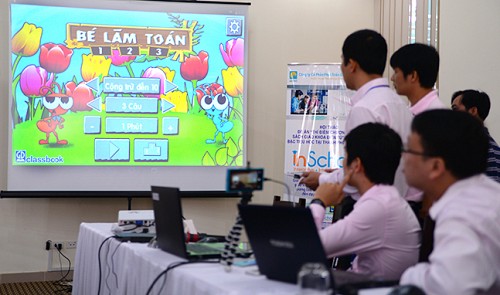 A project piloting new teaching methods with e-textbooks in elementary schools in Ho Chi Minh City has raised concerns among educators regarding its feasibility. The project was introduced at a seminar on piloting electronic textbooks for 1st, 2nd and 3rd graders in the city held by the municipal Department of Education and Training on July 18.

According to the project, traditional blackboards would be replaced by interactive boards, classes would be equipped with Wifi connection, and teachers would use software to compile lesson plans, manage classes and control what students do on their tablets.

Each student would have a tablet integrated with all textbook content. All tasks in classes would be done on the tablet.

Pham Thuc Truong Luong, a representative of EDC Company – the digital textbook arm under the country’s sole textbook publisher Vietnam Education Publishing House – which would provide the e-textbooks, said the company has digitized 300 textbooks from the 1st to 12th grades along with interactive content, a teacher’s lecture store and test banks to use for the project.

“This solves the limits of paper books. Those limits are slow updates, monotonous work, information that is hard to look up, non-interactive learning, and just plain bulk,” Luong said. “Teachers could send contents to students to save time. Students by themselves could search for documents on the Internet and work in groups without moving their tables.”

Intel Corp. will be in charge of training the teaching team if the project is approved.

Although detailed information about the project has not been widely released, a representative of the HCMC Department of Planning and Investment has revealed in his statement: “According to the content of the project we have received, the cost will be from VND3.9 trillion (US$183.56 million) to VND4.4 trillion ($207.1 million), including 27 to 32 percent from the society.”

Almost all participants at the seminar were interested in the project since it suits the trend of applying technology to education, but they also expressed concerns about the project’s possibility.

City educators are doubtful about such issues as the funding for tablets, equipment management, and the effectiveness of the new method compared to the old one when applying to elementary students who are in the process of learning how to read and write.

“I still wonder about the tablet screen’s brightness and its effect on students’ eyes if they use the machines continuously for 30 minutes,” Tran Thi Thanh Thuy, vice head of the District 10 Office of Education and Training, said.

“Though kids nowadays can use tablets beginning at the age of two or three, how can we make sure that they use the devices effectively for studying?”

Nguyen Van Lam, vice head of the Economic-Budget Committee of the city People's Council said that experts should consider which age is the most suitable for kids to access technology.

“More than VND4 trillion is not a small number. We need to do a survey on the financial ability of students’ parents in every locality,” he added.

Meanwhile, Tran Trong Khiem, deputy head of the Tan Phu District Office of Education and Training, wonders about the continuity of the project.

“Will students get bored if the structure of the curriculum remains unchanged over many years? How will the process be carried out, widely or partly?” he expressed. “I think that every modern method needs to remain traditional while also combining with other methods.”

Many attendees who are directors and deputy directors at educational departments of districts around the city said they had not received any detailed documents about the project before and while attending the seminar.

“I came to the seminar without any documents on the project. I need to have it so that I can make comments. We need to have specific goals, as well as a survey and evaluation for piloting a project,” Le Thai Hy, director of the HCMC Department of Information and Communications, stated.

“It should be able to be successful in urban and rural areas as well. In addition, domestic technology should be used in the project instead of imported tablets and we should have software chosen by the society to avoid a monopoly.”