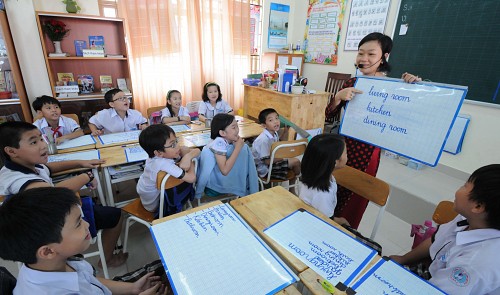 Vietnam is among the group of countries which have “low proficiency” in the 2014 EF English Proficiency Index, the Switzerland-based international education company Education First (EF) announced at a press conference in Hanoi on Monday.

The firm’s annual index, which is in its fourth edition, ranks a total of 63 countries and territories.

According to the index, Denmark, the Netherlands and Sweden top the 2014 ranking and were included in the “very high proficiency” group with scores of 69.30, 68.98 and 67.80, respectively.

The 2014 EF English Proficiency Index also points out Hanoi and Ho Chi Minh City have higher English proficiency than other parts of Vietnam.

The numbers show a drop in Vietnam’s position in the index since last year, when the country ranked 28/60 countries with a score of 52.27.

However, according to the index, although average adult English proficiency in Vietnam is low, skill levels have improved rapidly in the last seven years.

Vietnam is among three Southeast Asian countries, besides Indonesia and Thailand, which were some of the most-improved in the world during the period.

The 2014 EF English Proficiency Index also recorded that Vietnam has made significant headway in English language education, and the government intends to further that progress.

In 2008, the Vietnamese government passed Decision 1400, which declared that by 2020, “foreign languages [will be] a comparative advantage of development for Vietnamese people,” the index said.

“The government plans to spend 450 million USD between 2008 and 2020 on language learning, and 85% of that budget has been dedicated to teacher training,” the fourth edition of the EF English Proficiency Index wrote.

“English is the most important business language in the world. Vietnam, in the process of globalization, is committed to reforming language education to focus on teaching English for communication purposes,” the 2014 EF English Proficiency Index added, quoting Dr. Tu Anh Thi Vu, executive director of Vietnam’s National Foreign Languages Project 2020.

“It’s not about technology, not about textbooks, it’s about teachers being the main factor that chan