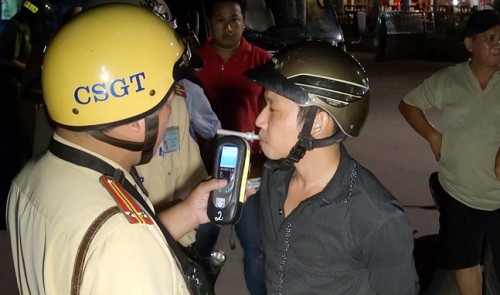 Vietnam’s central traffic safety agency has announced a large national campaign to tighten control over the amount of alcohol drivers can drink, with a view to strengthen traffic safety during the coming Christmas, New Year and Tet (Lunar New Year) holidays.

The National Traffic Safety Committee on Tuesday declared the “plan for control and handling of violations of regulations on breath alcohol concentration (BAC) of drivers of motorized road vehicles in late 2014 and the Lunar New Year.” The campaign is divided into three stages, the first of which will take place from December 15 to December 31, the second will be from January 15 to January 31, 2015, and the last will run between February 15 and February 28, 2015. Khuat Viet Hung, deputy chairman of the committee, said that most traffic accidents during Tet are caused by drunk drivers who travel in the wrong lane, speed, or lose control of their vehicle. During the coming campaign, traffic police officers will stop suspicious drivers and request them to breathe into a breath alcohol calculator while still seated on their vehicle, Hung said. However, drivers of heavy trucks and buses must get out of their vehicles for an alcohol concentration check. This method has been applied effectively in eight localities, he added. If their BAC is not higher than the allowable level, police officers will apologize and let them go, the official said. But if their BAC is higher than the alcohol limit, police officers will escort the driver to a handling area for further steps, including checking papers and another test to determine their exact breath alcohol concentration, he added.Penalties Under Decree 171/2013 by the Government, a fine of VND500,000-1 million (US$23.4-$46.8) is applied to drunk drivers of motorbikes if they are found to have an alcohol level ranging from 0.25 mg to 0.40 mg per liter of breath, or 50-80 mg per 100 ml of blood. In addition, violators will have their driver’s license revoked for a month and their vehicle impounded for a week. With alcohol levels of over 0.4 mg per liter of breath, or 80 mg per 100 ml of blood, the fines for motorbike drivers range from VND2-3 million ($93.7-$140.5). Such a driver will also have their vehicle impounded a week and their driver’s license revoked for two months.   As for drivers of automobiles, the fines are VND7-8 million ($375.2-$469) for drivers with alcohol levels of 0.25-0.4 mg per liter of breath.

In case the alcohol level is over 0.4 mg per liter of breath, the fine is VND10-15 million ($469-$703.7).For both cases, drivers will have their automobiles impounded a week and their driver’s license revoked for two months.   Mr. Jeffery Kobza, acting chief representative of the World Health Organization in Vietnam, said that driving under the influence of alcohol is one of the major causes of traffic accidents in Vietnam. The figures collected in a road traffic safety project carried out in Ha Nam and Ninh Binh provinces from 2010-2014 with funding from the Bloomberg Philanthropies showed that about 20 percent of drivers had their blood alcohol concentration exceed the allowable limit.