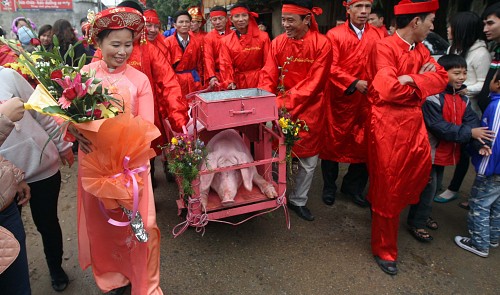 The Department of Culture, Sports, and Tourism of the northern Vietnamese province of Bac Ninh has proposed changing the name and limiting the number of people witnessing the slaughtering segment of a local festival, following a complaint about its cruelty by an international animal rights group.

Its proposal has been sent to the provincial People’s Committee after the Hong Kong-based animal protection NGO Animals Asia called on people to sign a petition urging relevant Vietnamese agencies to end the Nem Thuong Pig Slaughter Festival because it displays brutality.

At the festival, which attracts thousands of locals and visitors, including children, and is annually held on the sixth day of the first month of the lunar year in Nem Thuong Village, Khac Niem Commune, Tien Du District, pigs are carried around the village and then slaughtered in front of the spectators as a sacrifice to God.