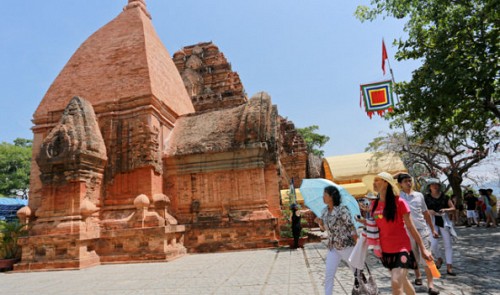 No tourists would want to climb all the way to visit a centuries-old architectural site just to see it to be surrounded by boring high-rises, and authorities of the south-central province of Khanh Hoa do not want that to happen to one of its iconic attractions.

With many multistory buildings already blocking the view to the famed Cham temple towers of Po Nagar in the provincial capital of Nha Trang, the Khanh Hoa administration has asked local architects to work out solutions for keeping the relic away from the concrete surroundings.

There must be a height limit for structures around the towers, located only 4km from the heart of Nha Trang, Khanh Hoa chairman Nguyen Chien Thang requested at a meeting on Monday.

Situated on Cu Lao Mountain, the Po Nagar complex was built sometime before 781.

It consists of three levels, the highest of which encompasses two rows of towers, with the main tower standing about 25 meters high.

As legend has it, Yan Po Nagar taught locals how to farm, weave and knit along with several other vocations to fend for themselves and safeguarded them from calamities and wars.

The famous tourist site is now surrounded by many tall hotels and houses, affecting the beach view from the temple, the provincial administration admitted in a report after a field study in March.

The Khanh Hoa Department of Construction suggested at the meeting that developments located to the west of the Po Nagar should not be taller than three stories, whereas they should have nine stories at most to the east area.

Other architects recommended that the caps be three, five and seven stories. The area closest to the site will be subject to the lowest ceiling, and the furthest to the highest cap, according to architects.

Chairman Thang requested that relevant agencies continue considering the issue and report their solutions to the administration.

Protecting the beaches and ecosystem in Nha Trang seems to be a challenge for the Khanh Hoa administration.

The province recently pulled the plug on a VND26.25 trillion (US$1.25 billion) project that had been criticized for threatening the beautiful beaches in the city.

The developer, India’s Dewan International Vietnam, lost the investment license as it failed to mobilize the needed capital for the project as committed.

The company had registered a capital of VND2.1 trillion ($100 million) and was required to find that sum by June 30, otherwise it would face a license revocation.

The project would have included many resort facilities and skyscrapers on the Nha Trang beach and on a land plot running south to Tran Phu Bridge.

It was also expected to cover part of the surface of Nha Trang Bay, a national attraction that is supposed to be kept intact.

The cancelation thus came as good news for locals and experts who are concerned that projects like this would destroy the ecosystem of Nha Trang.