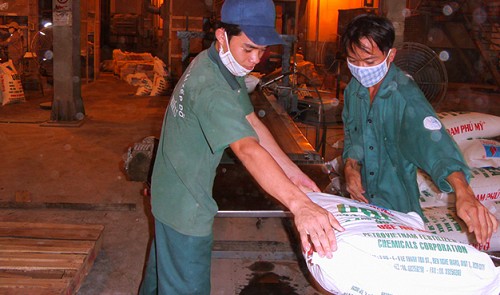 A state-run Vietnamese chemical giant on Sunday held a groundbreaking ceremony for a potash salt mine exploration project in Laos, which will free Vietnam from potassium fertilizer imports upon its completion.

The project, to be developed by the Vietnam National Chemical Group (Vinachem) at a total cost of US$522 million, is among the largest outbound investments of a Vietnamese firm, according to theVietnam News Agency.

The project is expected to produce 320,000 metric tons of potash salt per year, which will help reduce the importation of potassium fertilizers for both Vietnam and Laos.

It will also ease the shortage of industrial salt against the abundant supply of edible salt in Vietnam.

Vinachem itself covers $105 million out of the $522 million investment, whereas the remaining is funded by loans offered by Vietnamese commercial banks.

The modern project will contribute to the eco-social development of Khammuane and it reflects the comprehensive partnership between Vietnam and Laos, the Laotian premier said at the ceremony.

Prime Minister Dung also said the potash salt project is one of the key elements in the master plan for the development of the Vietnamese chemical industry, and will benefit both countries once it is on stream.

The project will also give a new boost to the bilateral economic ties between the two countries, the Vietnamese premier added.

Laos was where Vietnamese investors channeled the largest part of their outbound investment in the first half of this year, according to the Foreign Investment Agency (FIA) under the Ministry of Planning and Investment.

In the first six months, the Vietnamese ministry licensed 47 overseas projects worth a total of $155.4 million in 22 countries and territories, with the biggest share going to Laos, according to an FIA report in August.

Vietnamese investors pledged four new projects and adjusted the capital of two existing ones in Laos, with a total investment of $53.9 million in the six-month period, constituting nearly 35 percent of the total, according to the agency.