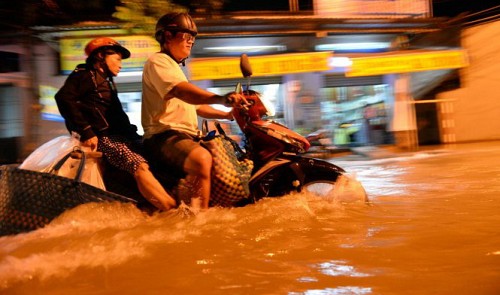 Heavy downpours are set to hit the Central Highlands and central regions, with flash flooding likely, according to the National Center for Hydro-Meteorological Forecasting.

Due to a cold air mass moving southeastwards and the Intertropical Convergence Zone crossing southern and central regions, downpours are expected to soak central towns and cities between Nghe An and Quang Ngai Provinces from Tuesday night onwards.

After a low-pressure system formed in the southern waters of Hoang Sa (Paracel) Islands at 1:00 am on Tuesday, the Central Highlands and southern regions can also expect heavy rain for the next three days, with high winds predicted in some places.

With high rainfall expected, flash flooding is likely in central provinces from Nghe An to Quang Ngai and in the Central Highlands. Landslides are also anticipated in mountainous areas while lower areas are forecast to flood.

Under the influence of the cold air mass, northern maritime areas of the East Vietnam Sea and the Gulf of Tonkin are expected to experience rough seas and high winds at 5-7 on the Beaufort scale.

The seawater of the southern area of the East Vietnam Sea and Binh Thuan to Ca Mau Provinces are possibly to be exposed to rain squalls with winds at 7-8 on the Beaufort scale. Rough seas 2-3 meters high are also predicted.

On Monday evening, a high tide submerged many streets and districts of Ho Chi Minh City. The phenomenon not only led to vehicle breakdowns but also flooded homes.