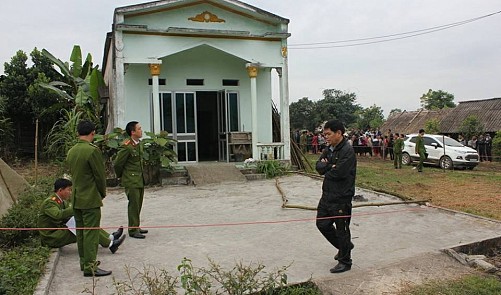 A man from the northern Vietnamese province of Ha Giang has been arrested for murdering his father and three other relatives after being discharged earlier this year from the hospital following treatment of a mental illness.

Phu Minh Tuan, 32, a resident of Tan Trinh Commune, Quang Binh District, was detained after slashing four people to death and injuring another on Thursday morning.

According to the Quang Binh District police department, Tuan arrived at a house belonging to his father, 59-year-old Phu Lao Ta, at around 4:00 am, before killing Ta and his two-year-old granddaughter, Phu Anh Tuyet, in their sleep.

The suspect continued his killing spree at the residence of his aunt, Tai Lo Mo, 51, where he killed Mo and injured her 26-year-old son, Phu Lao San.

After hearing screams for help, Phu Van Thinh, 23, a local militia officer and a relative of Tuan, rushed to the scene where he too was killed by Tuan.

Following the massacre, Tuan remained inside the house while police arrived at the scene and took him into custody, said Nguyen Tien Dung, chairman of the local People’s Committee.

San was admitted to the hospital in critical condition, Dung stated, adding that competent authorities are carrying out investigation.

Tuan’s mother was sleeping at a shelter near her farm at the time of the accident, according to the official.

According the Ha Giang Department of Police, Tuan was previously diagnosed with mental illness and ordered into mandatory treatment at the National Psychiatric Hospital.

The suspect was released from the infirmary on July 7, officers added.

The compulsory treatment was ordered after Tuan murdered his child in January 2015 and investigators attributed the murder to psychiatric problems.

According to Phu Quang Sy, Secretary of the Party Committee in Tan Trinh Commune, Tuan was unable to land a stable job after his discharge.

The murderer is the only person among his four other siblings to suffer from a mental disorder, Sy added.