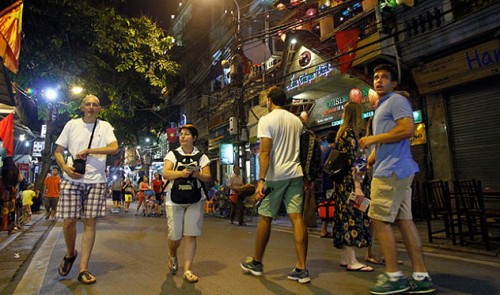 Hanoi has inked a US$2 million deal with CNN to air the city’s promotional materials for two years starting in 2017, the city’s chairman said on Monday.

Hanoi chairman Nguyen Duc Chung announced during a meeting with local business representatives on Monday that the city had concluded negotiations with U.S. television network CNN to promote the city on its broadcasts from 2017 to 2018.

“The city will spend $1 million each year promoting its image and that of its businesses on the CNN television channel,” Chung said.

Chung said negotiations with the channel began in August, and the campaign is expected to boost the number of foreign visitors to Vietnam’s capital.

The plan was conceived by Hanoi’s Department of Tourism, which has been working closely with the Department of Culture and Sports on a detailed strategy for the campaign, the latter’s deputy director Truong Minh Tien told Tuoi Tre (Youth) newspaper on Tuesday.

Tien said candidates to be included in the city’s promotional material were landmarks and relics such as the Imperial Citadel of Thang Long, the Confucian Temple – Imperial Academy, and Hoan Kiem Lake.

Hanoi will reserve all rights to the material to be aired on CNN, which will be used in future promotional campaigns on other television channels, said Phan Lan Tu, director of Hanoi’s Department of Information and Technology.

“[The campaign] was elaborately prepared for by multiple bodies in Hanoi, taking into account the fact that previous promotional budgets had been spent without significant results,” Tu said.

“Once we get quality promotional material airing on CNN, the media impact will be huge,” she added.

Field surveys and excavations are underway at Tan Son Nhat International Airport in Ho Chi Minh City to search for a mass grave said to contain the remains of hundreds of Vietnamese soldiers killed in wartime.