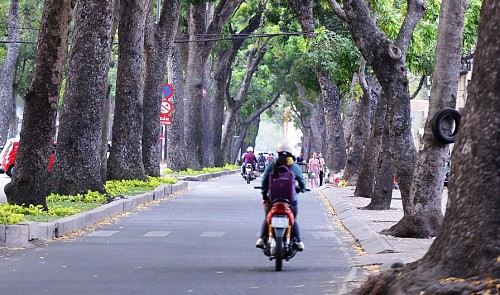 Authorities in Ho Chi Minh City are considering cutting down old trees to prevent accidents and ensure the safety of local residents.

The proposition was discussed during a scientific conference organized by the municipal Department of Transport and the Nong Lam (Agriculture and Forestry) University in Ho Chi Minh City on Tuesday morning.

According to the report of the transport department, over 130,000 green trees of about 180 species have been planted in local parks and along streets in the southern hub.

Nearly 7,000 of them have been categorized as old trees, those over 12 meters tall and more than 0.5 meter in trunk diameter, posing a risk of being broken or uprooted during stormy weather conditions.

About 126 trees across the city have been toppled in the first 10 months of this year, claiming the lives of two people and injuring nine others.

The broken and fallen trees were mostly located in downtown areas, especially in District 1, the report highlighted.

According to Nguyen Khac Dung, head of the Green Tree Management Office under the Department of Transport, heavy rains and strong winds brought about by climate change have caused more trees in the metropolis to fall.

Another contributing factor has been sidewalk construction and renovations which damage the roots of plants, making them more susceptible to strong winds.

Nguyen Du Sanh, a lecturer from the University of Science, said that trees can live a very long time in nature, but this was not necessarily the case for those planted in urban environments.

“Green trees grown in the city can provide shade and improve urban aesthetics, but should ‘resign’ after a certain time,” the expert said.

Depending on their species, trees should be replaced after a number of years, he explained.

According to Nguyen Trinh Kiem, an engineer from the Vietnam Parks- Greenery Association, an appraisal board should be established to study the ‘length of service’ suitable for each species of tree.

Ha Ngoc Truong, a member of the Vietnam Union of Scientific and Technical Association, the removal of green trees for safety reasons should be clearly communicated to local residents.

People will oppose the removal of  trees if they do not know the real cause, Truong elaborated.

Tran Quang Lam, deputy director of the city’s transport department, confirmed that he would request local scientists determine the age of green trees in order to actively replace those that are old and ‘out of service’.