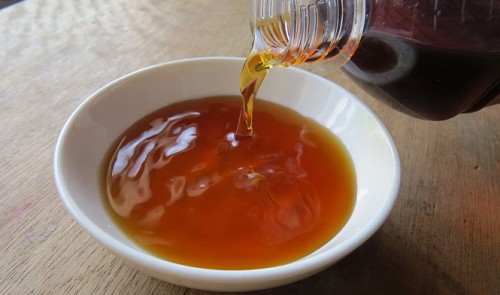 A consumer association has made a public apology for the misleading findings of its survey on the safety of Vietnamese fish sauce, but has ended up igniting a wave of fresh criticism for the manner in which it has admitted its mistake.

The Vietnam Standards and Consumers Association (Vinastas) has been under fire since its survey last month claimed that over two-thirds of the 150 fish sauce samples it tested contained more than the maximum allowable level of arsenic content per liter (1 gram).

It was discovered later that the non-profit organization deliberately released its findings in a misleading way, causing unnecessary fear among consumers.

According to the Ministry of Health, arsenic exists in both organic and inorganic forms, but only the latter is toxic. The arsenic in traditional fish sauce is organic, and Vietnam’s food watchdog sets no limit on organic arsenic content in fish sauce.

Traditional fish sauce is made from fermented fish, and only contains the non-toxic organic arsenic, whereas mass-produced sauces are made with artificial flavoring. The Vinastas survey suggested that traditionally-made sauces were toxic.

On Monday, Vinastas issued a statement, saying “on behalf of the [fish sauce] survey team, Vinastas extends its apology to consumers, fish sauce manufacturers and sellers, and management agencies for this incident.”

The document, signed by Vinastas chairman Doan Phuong, said the survey findings were released “in a less than careful and clear manner,” which referred to organic and inorganic as one and the same, spreading fear among consumers and fish sauce traders.

Vinastas has therefore apologized to all those affected by the inaccurate survey findings, and committed to “hold the relevant individuals accountable… in order not to repeat the mistake.”

The apology, which came more than a month after Vinastas terrified fish sauce consumers with its survey, did not appear to please the public.

What angers members of the public is the way Vinastas has stated that the apology is only made “on behalf of the survey team.”

“So this means only a few staffers of the association are to blame, and the deceptive survey was not done as requested by Vinastas leaders,” one Tuoi Tre (Youth) newspaper reader commented.

Another reader, Nguyen Ngoc Van, agreed, saying the Vinastas apology does not express any regret, but instead “shows disrespect to consumers and Vietnamese fish sauce makers.”

“The survey findings were released in the name of Vinastas, but the blame is finally put on the survey team members, not the association’s leaders,” Van said.

Despite the apology, Vinastas has also been criticized for not responding to numerous questions the public demand answers to, such as whether there was a secret sponsor behind the misleading survey, and how the association would compensate for the damages its false information caused to the public and the traditional fish sauce industry.

Last week, 50 local news outlets which subsequently reported on the story, quoting information from the Vinastas survey, were held accountable by the Ministry of Information and Communications.

Thanh Nien was found to have deliberately published a series of articles in exchange for advertising revenue, as well as having collected fish sauce samples for testing and later releasing the false test results of their own, independent of Vinastas'.