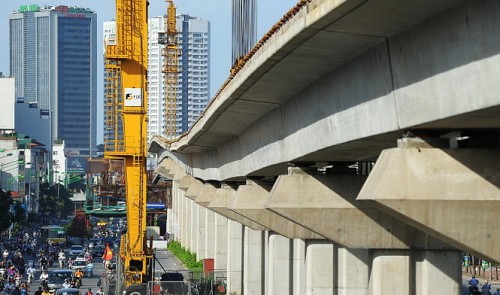 It is easy to access Chinese infrastructure loans, but the real cost is actually high for borrowers, once all factors are carefully considered, an economic expert has warned.

Loans provided by China are associated with several consequences, which negatively impact recipients, said Dr. Pham Sy Thanh, director of the Chinese Economic Studies Program (VCES), while speaking at a seminar held on Tuesday by the Vietnam Institute for Economic and Policy Research (VEPR).

China has provided loans worth a total of US$116.4 billion to countries around the world over the last few years, as many developing countries are attracted to such a rich source of credit, according to a report by VCES, managed by the VEPR.

However, Dr. Thanh said that while Chinese loans may be easy to access, as the lender sets manageable conditions for credit, they are in fact costly for borrowers.

Under the relaxed conditions, Chinese loans can result in environmental incidents and corruption, which is the real cost of the financial aid, he elaborated.

He pointed to several Chinese-funded projects in Latin America, Africa and Southeast Asia, where thousands of low-skilled Chinese workers came to work in the borrowing countries.

This is another real cost of Chinese-granted loans, Thanh said, as local workforces lose jobs to China on their home soil.

“China has a policy of giving loans in exchange for [the rights to exploit] the natural resources and mineral reserves of recipient countries, as evidenced in Venezuela, Angola and several other African nations,” Dr. Thanh said.

“This is a huge threat to developing nations if they continue to rely too heavily on Chinese money.”

Speaking at the seminar, Pham Chi Lan, a seasoned economic expert, supported the claims raised by Dr. Thanh, warning that the government should not rely on foreign loans and forget to provide opportunity to domestic business.

Sharing the view, Dr. Thanh said that before deciding to borrow from China, the government should carefully consider not only the need for the loan, but also the factors mentioned above.

Thanh said due process should be applied to planned projects like a north-to-south expressway, which has raised the debate on whether it should accept Chinese funding.

“If this project is divided into distinct investment stages, we should not jump into a decision to use Chinese credit,” he pressed.