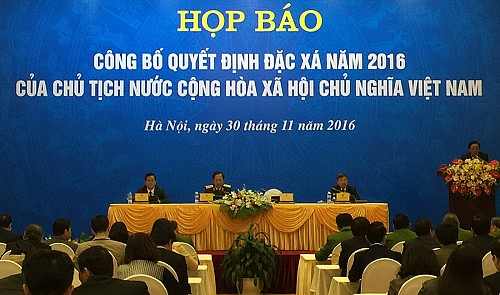 Vietnam pardons over 4,200 inmates ahead of New Year holiday

More than 4,200 inmates have been given a chance to go home in an amnesty granted ahead of the country’s New Year holiday.

The amnesty decision, granted by State President Tran Dai Quang, was officially announced by the Presidential Office in a press meeting in Hanoi on Wednesday.

The list includes 4,180 inmates; 186 people who have been sentenced to imprisonment but have yet to serve their time; and 18 others who have been temporarily suspended from jail service.

Those entitled to the release will go free from their jail service on Thursday, according to the decision.

Pardoning inmates who have displayed good behavior in prison is an annual tradition in Vietnam often performed in celebration of major holidays such as the National Day (September 2) or Tet holiday (Lunar New Year).

Nguyen Son, deputy chief justice of the People’s Supreme Court of Vietnam, said during Wednesday’s press conference that inmate Bui Tien Dung, the primary subject of a big corruption case unveiled in 2006 that involved senior officials at the transport ministry, was not qualified for this amnesty grant.

The 57-year-old is serving his tenth year of a 23-year sentence for the convicted crimes of corruption, bribery, gambling, and abuse of power.