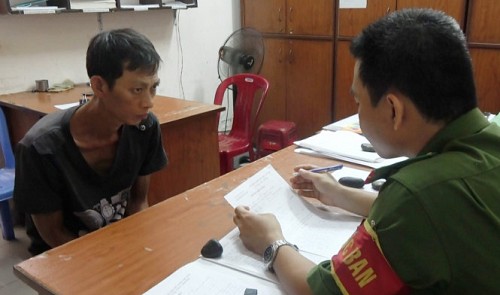 Police officers followed the man and caught him red-handed threatening a commuter in District 1 on the weekend after receiving a tip-off and video from Tuoi Tre.

On December 26, the newspaper tracked the man, now identified as Nguyen Van Cuong, a homeless 46-year-old, and caught him on tape intimidating bus commuters with a syringe tainted with blood.

Cuong was filmed telling the victims to give him cash or he would stab them with the syringe. He added that he had served 11 years in prison for muder.

The victims had no choice but to bow down to his intimidation.

The latest victim was P.V.T., 21, who came to catch a bus to Binh Duong Province at a station near Tu Du Hospital in District 1, Ho Chi Minh City, after finishing his work at a nearby construction site on Saturday night.

T. was giving him the cash when police officers turned up and arrested Cuong.

“He said that he had served a jail term and has a network of subordinates. He claimed to be HIV positive, demanding VND20,000 from me to buy drugs. He then pulled out a syringe, saying he would stab anyone looking down on him. I was so scared that I gave the money to him,” T. told Tuoi Tre.

Cuong also told police that he is HIV positive.

Cuong is in detention pending a further investigation.