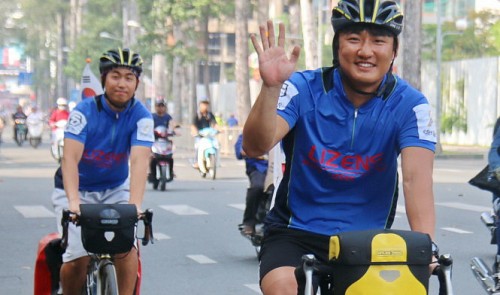 Korean students cycle across Vietnam to apologize for war crimes

Two Korean university students have cycled 1,700 kilometers from Hanoi to Ho Chi Minh City to raise awareness and express the remorse for war crimes committed by the Korean army in Vietnam.

Tae Geon Han, 26, and Gangan Lee, 25, both students from South Korea’s Incheon National University, took one month to ride between the two cities.

Throughout their journey, they stopped at locations where Vietnamese civilians had been massacred by South Korean mercenaries during the American war in Vietnam, with the duo displaying flags bearing the words “Xin Loi Vietnam” (Apologies to Vietnam) and bowing reverently to the victims and witnesses.

A total of 320,000 South Korean troops were sent to Vietnam between 1965 and 1973, according to The Hankyoreh 21 (The Korean Nation), the Seoul-based newspaper which first uncovered the killings.

An investigation by the paper in the 1980s uncovered statistics from the Vietnamese war crime commission that calculated the number of civilians killed by the Korean Tiger division in Tay Vinh Village, located in the south-central Vietnamese province of Binh Dinh, at 1,004 between January and February 1966.

Another 357 were murdered by the Blue Dragon division in Dien Ban Village, situated in the central province of Quang Nam, between January and February 1968, according to the same statistics.

“We learned of the tragic massacres and that Korea still owes Vietnam, the victims and their families an official apology. This saddened us and prompted us to undertake this journey,” Tae and Gangan told Tuoi Tre (Youth) newspaper in a recent interview before returning home.

Throughout the trip, the youngsters extended heart-felt apologies on behalf of Korea, and delved further into the historical truth by visiting several war museums across Vietnam, illuminating the dark details for more Koreans.

Tae and Gangan, who are both sports majors at university, revealed they had previously cycled over 4,000 kilometers in the U.S.

“We chose cycling instead of motorcycling as a greater challenge to ourselves. We also designed our own flags with the blue color, which is symbolic of peace, and printed the words ‘Cycling for Historical Truth’ to accentuate the significance of our trip,” the young men explained.

Tae and Gangan said they had visited Ha My, Phong Nhat and Phong Nhi Villages in Quang Nam Province, and Binh Hoa Commune in Quang Ngai Province in the central region, where the massacres took place.

“Our hearts sank when we bowed in front of the memorials in Phong Nhat and Phong Nhi Villages,” they said.

“The Korean army’s horrendous crimes against the Vietnamese people fully dawned on us then. All that we could do was bend over in repentance and hope such atrocities would never happen again.”

Tae and Gangan revealed that they had met a young man named Loc in Ha My Village.

Loc’s mother was a survivor of the massacres and had suffered sheer agony throughout these years.

“We were convinced that Koreans have to know what had happened,” Tae and Gangan said, adding four Korean newspapers had made arrangements to interview them upon their return.

“Hopefully the media will help us spread these distressing stories to our people.”

The young men admitted that they had been apprehensive about whether residents in the affected villages would drive them away upon learning that they were Korean.

“Contrary to our expectations, the local people were really nice and hospitable to us both. We were even treated to coffee from a sidewalk café in Quang Ngai,” they said.

“Many Koreans were still in the dark about what their country’s army had done in Vietnam. Some even dismissed our plan of cycling across Vietnam to extend our apologies as a crazy idea.

“We have patiently explained it to them, and many of them have begun to understand.”

The young men noted a high number of Korean visitors to Vietnam over recent years.

“They can enjoy the sights and be pampered by all of the delights of traveling, but should also try to discover what the Korean army did to the Vietnamese people. That’s the message we would like to convey to Koreans,” the duo stressed.

Tae and Gangan also told Tuoi Tre some of their most memorable moments during their cycling trip, including mingling with local children, gifting them balloons and teaching them how to play some sports, as well as spending time with orphans in Hanoi.

They encountered initial difficulty with Vietnamese food, such as pho (noodle soup with beef or chicken), one of the Vietnamese delicacies loved by most foreigners.

Tae and Gangan also found the heavy traffic and local drivers’ honking habit quite a problem.

Steep slopes, passes and rugged terrain in several regions did tire them out.

The scorching heat took its toll on the young cyclists too, so they chose to begin their day as early as five in the morning to avoid getting sunburned. They cycled around 90-100 kilometers each day, and stopped for rest every hour.

“We will return to Vietnam, as we’ve been infatuated with this country and its people. We love Hoi An [in Quang Nam Province] for its gorgeous landscape and serenity and will one day take our girlfriends there,” they said smiling.

Korea’s The Hankyoreh 21 newspaper launched an apology campaign in February 1999 that lasted until February 2003, following revelations of the atrocities the Korean mercenaries had inflicted on innocent Vietnamese civilians during the American war.

The campaign – which was a call for an apology and financial contributions to support Vietnamese victims and to build a peace park in Vietnam, among other activities – has been enthusiastically embraced and attracted the involvement of many Korean non-governmental organizations.