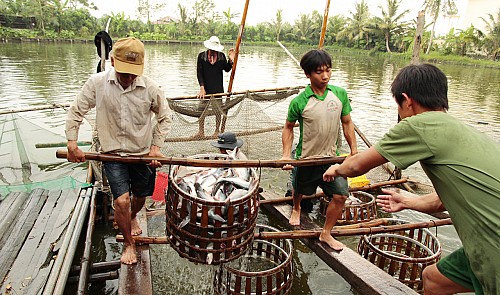 A surge in demand for catfish from the Chinese market has led farmers in Vietnam’s Mekong Delta to grow a large volume of the type of fish, despite many warnings from experts.

As catfish prices have topped VND27,000 (US$1.18) per kilogram, the highest in several years, local residents are scrambling to begin farming the aquatic animal or switching from raising other types of fish.

The fad is triggered by the rising demand from the Chinese market, experts stated, warning that there is no guarantee that the market would keep purchasing for a long time.

A sudden drop in demand will potentially lead to heavy losses for local farmers, the experts said.

P., a catfish farmer in Ke Sach District, Soc Trang Province, stated that his family current owns three ponds of catfish and are looking to rent extra space to expand their operation.

“One of my friends from Ho Chi Minh City, who has no experience in farming fish, intends to buy some seven ponds to begin cultivating the fish,” P. continued.

Many households in Hong Ngu District, Dong Thap Province, have been switching from snakeheads, whose price has recently dropped, to catfish following the new trend, said Pham Thanh Nhi, head of the local agriculture office.

During an interview with Tuoi Tre (Youth) newspaper, Vo Hung Dung, vice-president of the Vietnam Pangasius Association, China has bought much more Vietnamese catfish over the years.

The Chinese market only accounted for three percent of the Southeast Asian country’s catfish exports in 2011, Dung said, adding that the number had exceeded 18 percent in 2016.

Despite such statistics, experts from the association are studying the market in order to provide helpful suggestions for businesses and farmers, according to Dung.

“Fish farmers should be cautious as catfish prices fluctuate more often than not,” Nguyen Minh Nhi, former chairman of the People’s Committee in An Giang Province, said.

The An Giang Department of Agriculture and Rural Development has encouraged local residents to join businesses in farming catfish.

The cooperation will help ensure that the fish would be sold out, preventing farmers from suffering losse