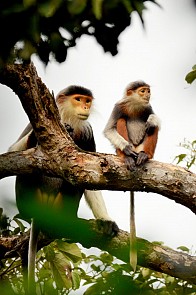 Over the past few years, a group of veterinary engineers and volunteers have been devoted to the rescue and care of animals, particularly the endangered red-shanked doucs, found on Son Tra Peninsula in the central Vietnamese city of Da Nang.

GreenViet, a Vietnamese animal rights group founded in 2012, has been conducting research and raising people’s awareness of the biodiversity in the central region and the Central Highlands, particularly in conserving the red-shanked douc population on Son Tra.

The peninsula, known for its pristine beauty and vast expanses of natural forest, used to shield the city from typhoons, sustain eco-tourism and provide shelter for national defense.

Considered the ‘queen’ of the primate world, the red-shanked douc, or vooc ngu sac in Vietnamese, boasts a distinctive coat of five different colors.

The animal usually sports maroon-red ‘stockings’ from its knees to its ankles, and appears to wear white forearm length gloves. Its look is accentuated by black hands and feet.

The primate is listed in Vietnam’s Red Book and is on the International Union for Conservation of Nature’s Red List of Threatened Species.

Spurred by nagging questions as to why Vietnam has perennially fallen back on support from international organizations in conserving its forests and wildlife, several young experts and volunteers have teamed up to form the GreenViet Biological Diversity Conservation Center.

Members have worked in a small, two-story house at the foot of Son Tra Mountain for more than five years now.

Bui Van Tuan, 31, head of GreenViet’s research department, revealed that the office is also his home.

The residence has become more and more cramped as it houses a growing number of animal conservation activities.

“We scientists wish to have our voices heard for the common sake, and hopefully our efforts will help turn Da Nang into a livable city conducive to sustainable tourism development,” Tuan said.

Though the GreenViet founders have doted on the doucs as the main beneficiary of their conservation drive, they still focus attention on how to cushion the peninsula’s entire ecosystem and wildlife from harm.

According to the center’s statistics, Son Tra features one of the country’s most diverse and unique tropical ecosystems, with currently up to 985 species of plant, 287 types of mammal and 115 varieties of bird, along with a rich marine life.

GreenViet was founded in late 2012, and is managed by the Da Nang Union of Scientific and Technical Associations.

The center began with just five members, led by Tran Huu Vy, now its director; and Dr. Ha Thang Long, representative of the Frankfurt Zoological Society, an international conservation organization established in 1858 with headquarters in Frankfurt and Main, Germany.

“We are all dedicated to the job out of our love for animals. We sometimes work elsewhere to cover the center’s expenses in times of no funding,” Vy said.

The team tried hard to popularize the image of the red-shanked doucs to the owners of local hotels, restaurants and cafés, many of whom bluntly drove them away with excuses that the visual presentation of a monkey brings nothing but bad luck.

They also pitched tents on mountains for six months in order to keep close track of the primates.

The team’s hard-earned successes have exceeded their expectations, as residents and agencies have been increasingly aware of the doucs’ presence after only five years, whereas their original goal was the year 2020.

The municipal Party Committee has also decided to use the endangered red-shanked douc as the symbol for the 2017 Asia-Pacific Economic Cooperation (APEC) forum it is hosting later this year.

The image of the cuddly primate has made its way to the city’s other major events, and was featured in interesting souvenirs for athletes after the 5th Asian Beach Games was hosted in Da Nang last year.

Tuan, an active, long-standing member, is currently reviewing for a scholarship to Germany, where he will delve into the world of animal sounds.

The young scientist made a hard decision not to take up an internship program on doucs’ DNA in Germany in February 2016, when he and his colleagues ventured into forests to snap photos and meticulously record illegally felled patches of forest on Son Tra Peninsula, which he published in a series of revealing posts on Facebook.

The revelations caught local authorities’ attention and prompted them to take action.

Following a Tuoi Tre (Youth) newspaper article revealing the illegal tree-felling, several officials involved were removed from their posts while implicated staff were transferred to other locations.

Right after gaining the exposure, Tuan was constantly intimidated via text messages on his phone.

Tuan and other volunteers also went to great lengths to pick up doucs’ droppings in the forests for months.

“Some mischievous, frisky langurs even defecate and urinate on our heads and then quickly take flight,” Tuan said.

He has also painstakingly frozen the excrements at minus 190 degrees Celsius and completed complicated procedures to send them to the U.S. for detailed analysis.

After months of long hard work, the GreenViet researchers had an article published in a U.S. scientific journal.

Le Trang, a fresh graduate in waste treatment from a local university, is in charge of community education activities on wildlife protection.

She regularly screens documentaries featuring the doucs to school students and residents at the center.

The young engineer recently got the nod from the municipal Department of Education and Training to screen the documentary at local schools.

“Following recent incidents, we now have new partners, including the government, who are ready to take the necessary action, and of course many nature lovers,” Vy, GreenViet’s director, added.

According to the conservationists, the zoning plan for 2025-30 for Son Tra, which earmarks space for tourism projects and economic growth, will take a heavy toll on the peninsula’s wildlife.

“If project developers, local authorities, residents and scientists are willing to sit down and discuss, I’m positive they will come up with the best decision for Son Tra and the animals will survive,” he noted.

Late last month, the municipal Party Committee required a local firm to dismantle a resort project that had been built without proper permits on Son Tra Peninsula.

​Vietnamese love for parents: it’s filial affection, but not duty

Despite the availability of nursing homes and daycare services, many Vietnamese take their parents under their wings