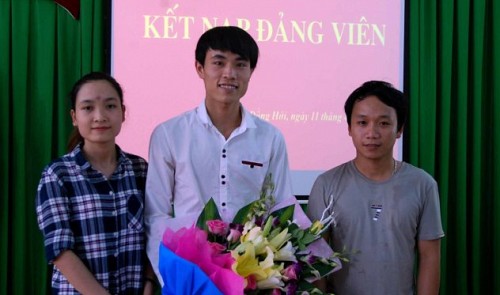 Three Vietnamese students have defied vehement objections from their family and community to apply to donate their body tissue upon their death to those desperate for organ transplants.

Three students from Quang Binh University in the north-central namesake province have recently applied to donate their bodies to scientific research.

Duc is the first student from his university to pledge his organs to medical causes.

He received his tissue donation certificate one year ago and says he’ll never forget the feeling of knowing that he had made such an important and momentous decision.

“Bodies can be reduced to ashes, but tissue donors are able to have their organs live on,” Duc said.

Active in volunteering activities since his freshman year, the third-year student is also chair of Net But Xanh (Green Strokes), an organization which raises funds to assist hundreds of needy people throughout Quang Binh.

“I first learned of tissue donation during small talks with my fellow volunteers. We didn’t take it too seriously because the practice is still in its infancy in Vietnam,” Duc recalled.

The man continued to became obsessed with the issue the more thought he gave it.

Internet searches revealed to the student that a tissue donation registration office is located in Hanoi, approximately 550 kilometers from Quang Binh.

Amazed at how donated organs have done wonders to those in need, he decided to file his application.

The necessity of tissue donation also sank in with Hung and Ha, who are also committed volunteers, during their trips to carry relief to catastrophe-struck localities across the province.

The two young people soon made their decision to continue to make themselves of use to others after their deaths.

“Everyone must die sooner or later. Life is a valuable existence, so donating organs to keep others alive is an act that prolongs that meaning,” Hung said.

The young man had a long, hard internal debate about the idea for a week before plucking up enough courage to inform his parents of his decision.

His parents, farmers residing in the mountainous district of Tuyen Hoa, objected to their son’s decision on tissue donation, an unprecedented choice in their remote neighborhood.

It took them a long while to see the situation for their son’s point of view.

The most daunting challenge came when neighbors began to gossip harshly about Hung’s decision.

Several even came to see his parents and intimidated them into persuading him to change his mind, claiming the act goes against the village’s long-standing practices.

Just as Hung’s parents were about to succumb to the escalating pressure and Hung himself was on the verge of giving up, images of road accident victims and physically challenged people desperate for organs flooded back, building up his strength to carry on the fight.

His parents finally became sympathetic to and supportive of his good deed.

The youngest child in a family also residing in Tuyen Hoa District, Ha daringly signed up for tissue donation behind her family’s back.

She only summoned the courage to break the news to her family recently.

The small-built girl stayed up the whole night to write a letter to her parents about her decision to posthumously donate her organs, detailing the benefits before sending it to her family members via Facebook.

“I anxiously waited for their reactions the following day. My parents and siblings were stunned at first, but they soon gave their ‘OK’,” Ha said with a content smile.

Vuong Kim Thanh, head of the student affairs department at Quang Binh University, admitted he himself was taken aback by the trio’s decision.

“Their good deed has helped change their peers’ mind about living for others,” he noted.

Vietnam and the U.S. also voiced their concerns over North Korea’s nuclear weapons and ballistic missile programs and tests in their joint statement