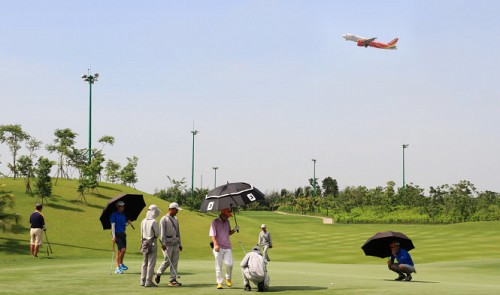 While Ho Chi Minh City’s overloaded Tan Son Nhat International Airport remains in dire need of land for its much needed expansion, a huge area lying within the boundaries of Vietnam’s busiest airdrome is home to a sweeping golf course.

The Tan Son Nhat Golf Course, inaugurated in August 2015, is infamous for occupying an enormous 157-hectare area that critics say should instead serve the expansion of the busy eponymous airport.

The A and D Courses of the golf course’s land lie adjacent to Tan Son Nhat, while the C Course sits only a row of trees apart from the airport’s runways.

Dr. Nguyen Dang Diep, a former air force officer, said he has visited many countries and never “seen any city housing a golf course built within its airport.”

Diep said once the golf course is removed, it will spare 157 hectares of land for the expansion of Tan Son Nhat, bringing with it a myriad of benefits.

“The airport's capacity will then be increased by up to 40 percent,” he said, adding that the removal of the golf course will keep the airport from flooding during heaving rains.

“There will be more aprons so airlines will no longer have to waste money parking their aircraft overnight at other airports.”

A number of petitions and complaints to have the land housing the golf course revoked to make more space for Tan Son Nhat have gone unanswered.

Several lawmakers reiterated the request in an ongoing session of the lawmaking National Assembly.

While there is a low likelihood of the latest plea being heard, Tuoi Tre (Youth) newspaper has attempted to enter Tan Son Nhat Golf Course to see what is inside, only to realize that the venue is practically an inaccessible fortress.

The developer brags that the venue is the only golf course to be established within the urban area of Ho Chi Minh City, using the tagline “New Destination, New Value.”

In one attempt, the reporters went undercover as employees who followed their boss, a construction mogul, to play golf.

Shortly after reaching the edge of the golf course, the reporters were asked by an attendant to leave as “this is the airport area with restricted access.”

A request to take photos was also turned down, with the attendant this time warning that “this is a military zone.”

The Tuoi Tre reporters eventually entered the course in their third attempt, this time assuming the undercover identities of caddies for a South Korean boss.

Other caddies at the golf course revealed that 70 percent of players are foreigners, mostly from South Korea.

The course’s website is available in Korean, Vietnamese, and English.

The course’s clubhouse area stands out to include a large, luxurious building constructed with semi-classical architecture, a restaurant, and a 2,000-seat wedding convention center featuring a helipad.

The golf course seems boundless with four playing zones and a 2,050-square-meter parking lot, capable of accommodating 361 cars and 500 motorbikes.

The artificial grasses used at the golf course are Paspalum Platinum and TifEagle, premium products that are only used in world-class courses and football fields.

The golf course opens from early in the morning till 10:00 pm, with hundreds of daily players and their caddies, all of whom must book their tee time in advance.

Most of the players are foreigners, taken directly to the golf course by shuttle bus shortly after landing.

However, more than the magnificent landscape, what makes Tan Son Nhat Golf Course appealing to players is the unique experience of playing when planes take off and land above their heads.

Many golfers told Tuoi Tre they love the noise the plane engines make when speeding up to leave the ground.

Few places allow golfers to pose for photos while making a shot surrounded by green grass, a blue sky, and an airplane leaving the runway.