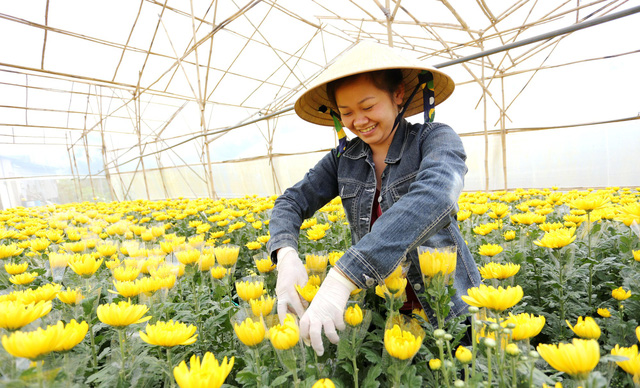 A batch of highly skilled flower and vegetable farmers who migrated from the north of Vietnam to Da Lat are credited with laying the groundwork for the city’s evolution into the country’s vegetable hub.

Migrant farmers spear-headed their way through poor conditions to turn the once desolate land surrounding the Central Highlands city of Da Lat into the predecessor for today’s ‘city of thousands of flowers.’

It took over 120 years since Swiss-French physician and bacteriologist Alexandre Yersin’s discovery of the Liang Biang Plateau in 1893 for the town to grow into Vietnam’s leading veggie and flower producer.

The Liang Biang Plateau, situated 300km northwest of Ho Chi Minh City, is the home of Da Lat City – a beloved resort town and the heart of Lam Dong Province in the Central Highlands.

According to archives, the demand for fresh vegetables in Da Lat began to skyrocket in the 1930s as French soldiers were brought to the city for injury treatment.

Supply, however, fell short of demand and French troops were forced to have fresh produce shipped from Hanoi.

Hoang Trong Phu, chairman of the Northern Social Aid Committee and chief of northern Ha Dong Province, once home to famed flower villages, was the first to send farmers from Ha Dong to other regions in Vietnam to improve the lives of the local population.

Meanwhile, Tran Van Ly, a former chief of Lam Dong Province who took office in 1936, began mulling over the prospect of developing flower and vegetable farms in Da Lat.

Quite knowledgeable about France, he saw no reason not to put the idea into practice, as France and Da Lat have similarities in weather and soil.

Ly then sought help from Phu, who agreed and trusted Le Van Dinh, an agricultural counselor in Ha Dong with implementing the plan to send farmers to Da Lat.

Phu’s grave has become a monument in Ha Dong thanks to his innovative contributions to the agricultural development of the province and country.

The men and their families parted in tears before venturing down the unfamiliar road to Da Lat.

Of chief concern to the group was the year-round cold weather in Da Lat, where temperatures can bottom out at -5 degrees Celsius.

Ngo Van At, Ngon’s father, did not dare to take his family with him. It was one year later that the family was able to reunite in Da Lat.

For an entire year before leaving for Da Lat, the 35 men underwent strenuous training and testing, and ample encouragement from the province chief, in order for the group to garner the skills to create something worthwhile in the new land.

Cold and the threat of wild animals were a constant obstacle for the farmers.

At the 64-hectare village, the men would toil on the fields by day and keep guard by night, acutely aware of lurking predators.

Apart from hostile weather and predatory animals, what daunted the pioneers most was their difficulty in working the land.

The group had brought with them an entire train car of potato, cauliflower, strawberry, cabbage, rose, daisy, and jasmine seeds.

After two years of failed crops, the pioneers nearly ran out of seedlings.

Ngon’s family met with the other villagers and the group decided to take a chance by switching to new farming methods for the remaining seedlings.

The new methods worked and lush flower and vegetable farms were thriving throughout the Ha Dong village by late 1940, two years after the group first set foot in Da Lat.

With farming business booming in Da Lat, the French began to ship the high-quality produce across Vietnam and to other Indochinese countries.

In 1940, Nghe Tinh Hamlet was formed by 70 households allocated with 36 hectares of land.

To become an inhabitant of the settlement, one had to have lived in Da Lat for more than one year and had no previous land ownership.

Nguyen Thai Hien was credited with sending farmers from the north-central provinces of Nghe An and Ha Tinh to Da Lat around 1927.

In 1924, he was appointed a forest ranger in Phan Thiet, now the capital of south-central Binh Thuan Province, before becoming a public greenery superintendent in Da Lat in 1927.

Hien was credited with ‘taming’ wild mai anh dao (cherry-like apricot blossoms) and transforming it into one of Da Lat’s signature flowers.

He was also lauded for successfully producing and trading exotic varieties of flowers and greens, particularly those from France, in the city’s farms.

The agriculturalist was instrumental in localizing French breeds which had been originally grown in Da Lat on a pilot basis to cater to the demands of French officials.

Local residents became increasingly familiar with imported breeds of flowers, veggies and fruits, including lettuce, tomato, poireau (a type of leek), celery, green peppers, asparagus, strawberry, avocado, apple and artichoke, all of which had been brought to town by Hien.

He is also credited with establishing a business to trade in the abundant produce from Ha Dong Flower Village and Nghe Tinh Veggie Village and conduct transactions with other provinces and neighboring countries.

The store provided local farmers with food, fertilizers, and pesticides before and was paid back in produce.

The store also operated an effective distribution system to ship products to other localities.

Apart from hamlets scattered at the foot of Lang Biang and on the border Dankia and Suoi Vang Lakes that were inhabited by ethnic minority groups, villages and settlements were later added to Da Lat when Kinh people, the ethnic majority of the Vietnamese population, moved to the idyllic town.

An example of the trend was Da Lac Temple.

The temple was built in 1920 as part of Da Lac Village, nestled on the east bank of iconic Cam Ly Spring.