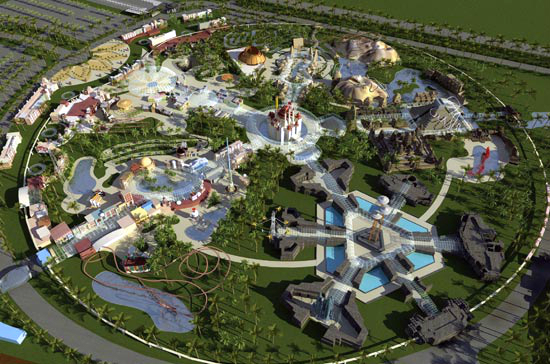 Multibillion-dollar property project in southern VN urged to speed up

Authorities in the southern province of Long An have asked the investor of a multibillion-dollar complex project in the province to accelerate development as its progress has fallen behind schedule.

The requirement came after an official inspection to review the progress of the $2.2 billion Happyland project implemented by Phu An Investment - Construction and Infrastructure Development.

Accordingly, Long An Provincial People's Committee asked Phu An Co to map out feasible solutions, including completing legal procedures to invite more investors to join to resolve the deadlock on project financing.

On the other hand, the firm should actively cooperate with the local government to quickly solve problems in site clearance and handling the certificates of land use rights for those who were displaced for the project.

Admitting the difficulties in capital mobilization, An Phu Co continued to commit to carry on and put the project into operation part by part. It is expected that a part of the first phase of the project will be completed and put into operation in the 2014-2015 period.

With a total investment of $ 2.2 billion for the first phase, the Happyland entertainment complex has seen a disbursement of about $330 million.

Troublesome project from the start

Ho Chi Minh City-based Khang Thong Group, the former developer of the mega-theme park, lost its license to develop an industrial park in the southern province of Tien Giang in July last year.

Khang Thong, which initiated the development of the US$2.2 billion entertainment complex in neighboring Long An Province in 2011, had previously asked Tien Giang authorities for a return of the industrial project to the province, citing high land compensation expenses among their reasons.

Developed on a 338ha area in Ben Luc District, the multibillion-dollar project, inspired by Disneyland, will include a theme park that costs $600 million, a 3.7 km boardwalk, a shopping center, 3-5 star hotels, water parks, studios, indoor and outdoor theaters, restaurants, a floating market, and other facilities.

The project site along the Vam Co Dong River was once meant for a large-scale industrial park but Khang Thong then switched to a tourist attraction construction plan following environmental concerns.

The development is projected to be Southeast Asia’s largest attraction of its kind and to draw fourteen million visitors a year, including three million foreigners, when finished in April 2014.

In February 2012, Joseph Jackson, father of late pop king Michael Jackson, announced on his website that he would pull out of the massive entertainment complex Happyland. He had signed a deal to be involved in the construction of a major Happyland hotel in 2011.

His withdrawal from the development of the hotel was posted on his official website one moth earlier, and confirmed by Phan Thi Phuong Thao, board chairman of its developer Khang Thong Group.

The website said that Jackson decided not to proceed with any further investment or involvement in the project after ‘careful due diligence and discussions with his wife, family and advisers.’ He believed in the growth potential of Vietnam and would return to it for new opportunities soon, the website reads.

Meanwhile, Thao told the Saigon Times Online that Jackson signed a memorandum of understanding with Khang Thong in February 2011 to advise and help it find investors for the development of a five-star, 1,000-room hotel inside the complex.

The man has so far recommended two U.S. investors to Khang Thong but no deals have been clinched between them, the chairman added.

An American manager, former boxer and former musician, the 82-year-old man is best known as the father of American entertainers Michael Jackson and Janet Jackson, and the creator and manager of The Jackson 5, a Motown group comprising several of his children.