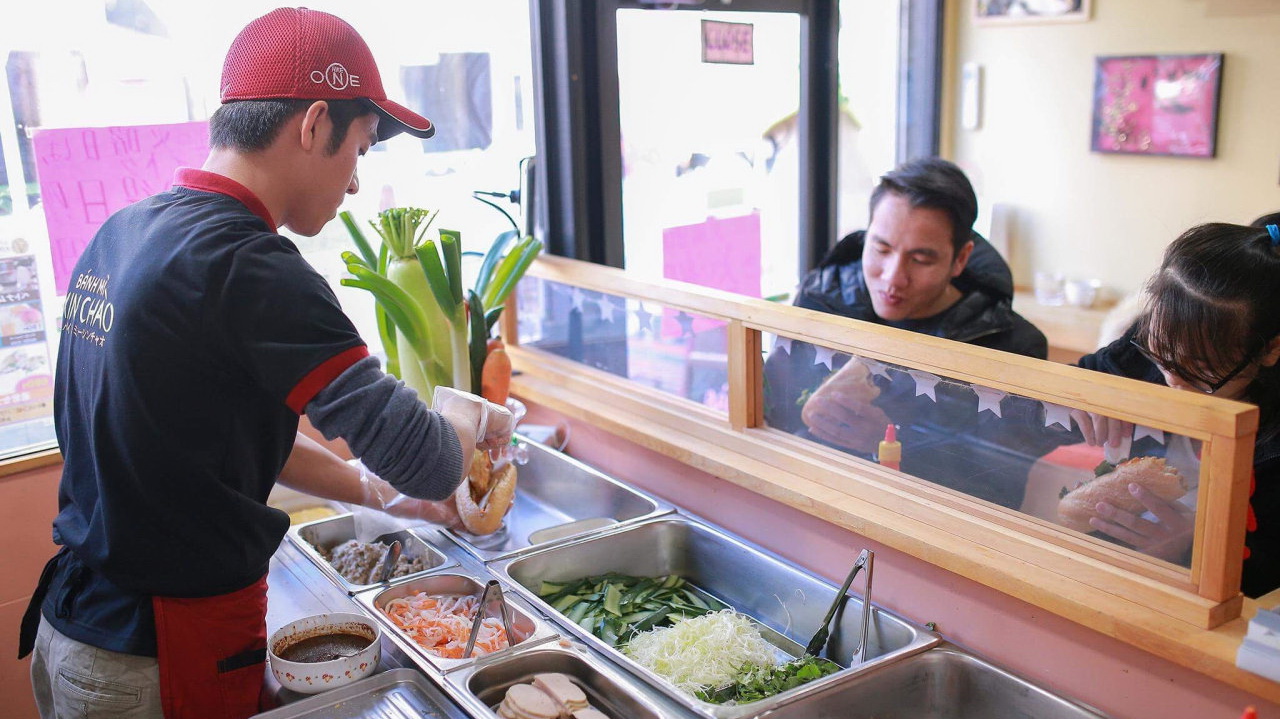 Two Vietnamese brothers have made a name for themselves in Tokyo as their ‘banh mi’ store is now a new craze among Japanese foodies.

The store, ‘Xin Chao’ (Hello), was launched last October by Bui Thanh Duy, 31, and Bui Thanh Tam, 26, on the avenue of Waseda-dori in the Japanese capital.

It offers diners the taste of ‘banh mi,’ or Vietnamese sandwich, one of the most globally popular Vietnamese dishes, second perhaps only to ‘pho’ (beef noodle soup).

In 2011, the term banh mi was deemed ubiquitous enough in everyday conversation to be added to the Oxford English Dictionary’s canon of existing English words.

The store and its Vietnamese owners have been featured in Chunichi, a leading Japanese daily.

It all began in June 2015, when Tam visited a market in Tokyo and saw a long line of customers waiting at a store selling Turkish kebabs.

“I bought one portion to try out the food,” Tam recalled. “It was tasty, but definitely not as delicious as Vietnamese banh mi. After that, I started contemplating the idea of opening a banh mi store in Japan, which was supported by both my brother and other members of my family.”

The most challenging part for foreigners to open a business in Japan is that they will need to prove they have never broken a law, have enough money to keep the business running or pay debts when it does not go well, and have a Japanese guardian, Tam said.

The siblings managed to rent a 22-square-meter location on Waseda-dori Avenue in Tokyo for nearly US$3,000 per month.

“We were lucky to have a Japanese professor agree to be our guardian,” Tam said. “He was worried at first, but he was overcome with joy and pride upon seeing our store being featured on Japanese television and in local newspapers.”

They had to borrow money from family members and friends to renovate the location and cover the initial costs of ingredients, electricity and gas.

“On the opening day, we sold over 500 loaves of banh mi despite having only advertised the store on social media and via leaflets,” Tam said. “Everything is going well, and we’re looking to turn the business into a chain in Japan.”

‘Xin Chao’ now sells around 200 loaves of banh mi every day, which is “beyond [the] wildest expectations” of Duy and Tam.

An article about ‘Xin Chao’ Store in a Japanese newspaper. Photo: Thanh Tam

The hunt for Vietnamese baguettes

According to Tam, one of their most difficult tasks when opening the store was to search for a supplier of Vietnamese baguettes, the single most important ingredient in a Vietnamese banh mi.

“In Japan, they mostly make French-style baguettes, which have a thick crust and are not as fluffy as the Vietnamese bread,” Tam explained. “Most bakeries would only agree to supply Vietnamese baguettes if we could buy at least 10,000 loaves a day, as their production line is fully automated for mass production.”

Luckily, the brothers managed to find a bakery which not only consented to make Vietnamese baguettes but was also attentive to detail to replicate as closely as possible the Vietnamese taste of a baguette.

According to Tam, there are around seven stores selling banh mi in Tokyo, most of which are run by Japanese owners, so their strategy to attract customers is to offer eaters the full taste of a loaf of banh mi from central Vietnam’s Hoi An City, stuffed with ham, cucumber, pâté and butter.

“I want to promote the image of a beautiful Vietnam and elegant Vietnamese people to international friends at all costs,” Tam said. “And I hope to achieve that goal through these loaves of tasty banh mi.”