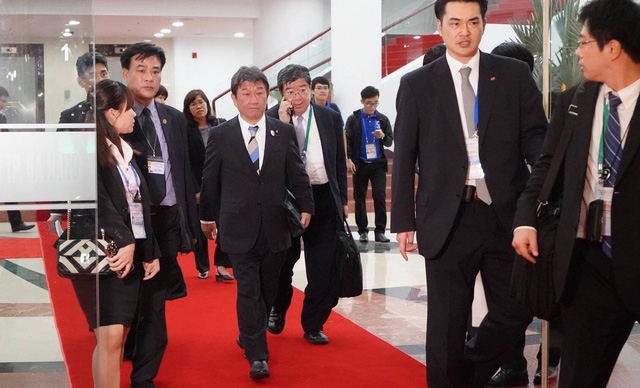 ​Asia-Pacific ministers, including one from Vietnam, agree in principle to TPP

Ministers from the Asia-Pacific on Thursday agreed in principle on the terms of a free trade pact that includes 11 economies in the region despite the withdrawal of the U.S. early this year, negotiators told Tuoi Tre (Youth) newspaper.

Toshimitsu Motegi, Japanese Minister in charge of Economic Revitalization, told Tuoi Tre after a closed-door negotiation in Da Nang, located in Vietnam, that all sides had reached in-principle consent with regard to the TPP.

Motegi noted that there were many difficulties in negotiating this multilateral trade accord, including a balance of interests for all sides.

Asked about Japan’s efforts in the negotiation, the minister answered that his country had engaged in bilateral talks with many nations to secure their in-principle agreement.

The ministers will announce the result of their negotiation on Friday, the Japanese official revealed.

A minister from Malaysia told Tuoi Tre that he was happy with the negotiation by raising his thumb up.

“We had a very good meeting,” Australian minister Steven Ciobo said, walking out of the tense meeting room.

A minister from the Mexican delegation said that an official announcement would be made on Friday, adding that all sides had reached consensus and he was happy with it.

Vietnamese Minister of Industry and Trade Tran Tuan Anh had said the same day that the 11 remaining negotiating countries would continue trying to adjust the pact without the U.S. in order to ensure interests for all.

“We have kept trying to maintain the TPP as a quality trade accord, while seeking similarities to make sure it benefits all members,” Minister Anh said.

The TPP aims to eliminate tariffs on industrial and farm products across a bloc whose trade totaled $356 billion last year, according to Reuters.

It also has provisions for protecting everything from labor rights to the environment to intellectual property – one of the main sticking points, the news agency said.

Vietnam’s economic expert Vo tri Thanh told Tuoi Tre that the ministers’ being able to reach in-principle agreement on the terms of TPP-11 is a positive sign.

“We can expect the 11 economies to reach a consensus on a final plan to put the TPP-11, which retains all the spirits of the erstwhile TPP, into effect in the shortest time possible,” Thanh said.

Another Vietnamese economist, however, said it is too early to jump at a conclusion as “agreeing in principle” means there are still issues that need solving.

The pundit advised that the answer can only be found in the post-meeting conference on the TPP on Friday in Da Nang, when official contents of the closed-door negotiations over the last few days are expected to be disclosed.

Pham Chi Lan, another seasoned Vietnamese economist, also appeared skeptical. Lan said the “in-principle agreement” could mean that the economies involved have agreed to renegotiate the terms and conditions of the TPP, or set a new timeline to pursue the trade pact.

Ministers of the TPP-11 member economies gathered for the negotiation behind closed doors from around 7:30 pm on Thursday and only left the meeting room at 10:00 pm, to the surrounding of some 50 Vietnamese and international journalists.

TPP is a free trade agreement originally involving 12 member states of the Asia-Pacific region, including Australia, Brunei, Canada, Chile, Japan, Malaysia, Mexico, New Zealand, Peru, Singapore, the U.S. and Vietnam. It was expected to serve as a counterweight to China’s growing regional dominance.

However, the White House announced the United States’ withdrawal from the deal in January, leaving the remaining 11 members to adopt the new name of TPP-11 to continue negotiations without Washington.