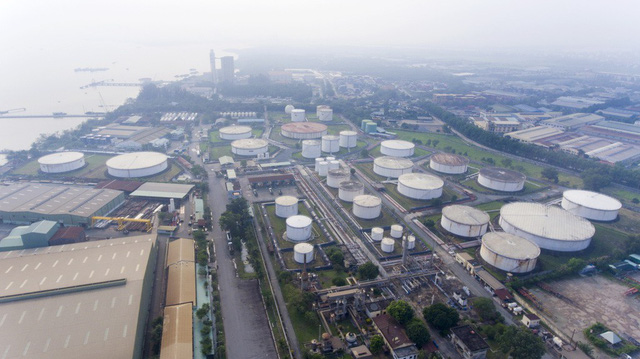 A proposal to upgrade a decades-old oil refinery in Ho Chi Minh City has sparked concerns as the operator wants to deploy Chinese technology for the facility that is located near a residential area.

Spanning 25 hectares in the Cat Lai Industrial Park in District 2, the refinery is operated by the Cat Lai Refinery Co., a subsidiary of Saigon Petro.

The facility is capable of treating 350,000 metric tons of oil a year, producing such products as kerosene, diesel oil and fuel oil, according to Saigon Petro’s website. The refinery is also in charge of receiving and storing fuel imports for Saigon Petro.

The facility was built in 1982, according to Saigon Giai Phong (Liberated Saigon) newspaper.

The refinery operator has submitted a proposal to upgrade the facility, sending its capacity to 400,000 metric tons a year, with an investment of VND1,179 billion (US$51.94 million).

A similar upgrade proposal was made and received in-principle approval from the prime minister in 2007, but had never been able to begin due to different reasons.

An official from the Ministry of Industry and Trade confirmed to Tuoi Tre (Youth) newspaper that the ministry had called on the government to provide in-principle approval to the latest upgrade proposition.

“With an approval from the government, the proposal still needs to meet environmental and effectiveness requirements before being allowed to be implemented,” he noted.

According to data obtained by Tuoi Tre, Saigon Petro will cover 45 percent of the VND1,179 billion investment needed for the upgrade, which will enable the facility to treat crude oil and condensate into fuel products meeting the Euro 4 emission standard.

The upgraded facility is expected to use the Naphtha Upgrading Technology provided by China’s Research Institute of Petroleum Processing.

The Ministry of Industry and Trade has shown support to the proposal, saying it is essential to have facilities capable of producing fuel meeting the higher Euro 4 and Euro 5 standards. The ministry also said the Chinese technology proposed for adaptation is “suitable.”

However, the Ministry of Science and Technology suggested that the refinery use technology from countries with an advanced refinery industry to ensure effectiveness, whereas PetroVietnam, the country’s oil and gas giant, said Saigon Petro has failed to prove just how popular and effective the Chinese technology it wants to deploy is.

The Cat Lai refinery is located next to facilities by other companies inside the Cat Lai Industrial Park, and less than one kilometer away, across Nguyen Thi Dinh Street, from a residential area, including several deluxe apartment products and schools.

T., a local resident, said he had no idea about Saigon Petro’s plan to upgrade its refinery when purchasing an apartment there. “Petroleum processing poses a high risk of fire and pollution but I still don’t know why they put such a facility so close to a residential area,” he said.

The refinery is also located a little more than one kilometer from a 66-hectare land plot, zoned for the Cat Lai – Binh Trung Dong urban area with an expected population of 20,000, and a 41-hectare complex of houses, trade centers and entertainment venues.

Ha Dang Son, director of Vietnam Research Center for Energy and Environment, said using condensate in petroleum production is good for the environment, but also a huge technical challenge. He also expressed concern about using Chinese technology, as China does not have strength in oil refinery.

“Ho Chi Minh City authorities have been relocated polluting manufacturing facilities out of residential areas, so should the Cat Lai refinery follow suit?” he questioned.

Son admitted that Cat Lai refinery has not caused any environmental problems yet, more challenges will come following its upgrade. “So the proposal must be carefully assessed, with participation from independent consulting units,” he recommended.