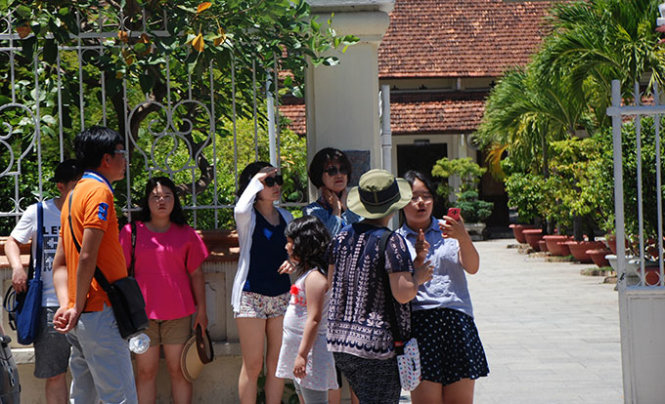 Concern about this kind of payment arose after inspectors of the State Bank of Vietnam and local police caught a store in Ha Long, a tourist city in the northern province of Quang Ninh, accepting payments from Chinese customers using three unlicensed POS machines last week.

The machines were found to have transferred more than 200,000 Chinese yuan, about VND700 million (US$30,800), to accounts in China, without any intermediary banking system in Vietnam knowing of the transactions.

According to Nguyen Ngoc Thach, director of the Quang Ninh branch of the State Bank of Vietnam, these POS machines are similar to those authorized by Vietnamese banks, but the contents of their invoices are all printed in Chinese.

“These devices only need an Internet or 3G connection to allow people to make payment anytime, anywhere,” Thach said.

“It is alarming that the POS machine is quite small and difficult to be detected unless the trader is caught in the act," he added.

Nguyen Duc Hien, deputy director and chief inspector of the branch, said any POS machine must be accepted by local banks and connected with the country’s payment centers to be considered legal in Vietnam.

The move is to control money flow and prevent illegal transactions that may cause losses in tax collection for the government, he added.

But the practice of using unlicensed POS to accept payments from Chinese travelers does not merely exist in Ha Long, but also in other popular Vietnamese destinations, including the central city of Da Nang.

Tuoi Tre (Youth) newspaper reporters visited the city’s Han Market and spotted many Chinese holidaymakers convincing local traders to allow them to pay via their digital wallets, or mobile apps.

One tourist from the Chinese city of Guangzhou asked a Vietnamese vendor named Vo Thu Nhan if her shop accepted payment via WeChat Pay, a leading mobile wallet in China.

Nhan at first turned down the request, saying she knew nothing about the app.

However, the vendor later allowed the Chinese tourist to pay the way she wanted, with help with using WeChat Pay from a fellow trader.

The local merchant opened her app, created a QR (Quick Response) code containing the payment information for the purchase, and the Chinese tourist used her smartphone to scan the code. In 30 seconds, the transaction was completed.

The problem is the money went directly to an entity in China, before being paid back to the mobile wallet account of the Vietnamese merchant.

Vietnamese regulators would have no idea of such a transaction, thus failing to collect taxes from the payment.

In fact, small vendors in Da Nang, where 35 percent of foreign holidaymakers are Chinese-speaking people, are gearing up to adapt to the e-commerce and mobile wallet trend.

N.L., a tour operator in Da Nang, told Tuoi Tre that Chinese tourists usually offer to pay via WeChat Pay and Alipay, another popular Chinese mobile wallet, when they shop at local businesses.

Even though the Vietnamese vendors have never heard of the apps before, most of them would accept payments that way to please their customers, L. added.

In November 2017, WeChat Pay announced it had connected with the Vietnamese payment system, through Vimo, a mobile wallet developed by Vietnam’s leading mobile network operator Mobifone.

The app allows Chinese travelers to use WeChat Pay to make payments in Vietnamese dong at VIMO-accepting stores when they travel in Vietnam.

In the same month, Chinese online payment platform Alipay, a subsidiary of Alibaba Group, signed an agreement with the National Payment Corporation of Vietnam (NAPAS) to launch Alipay payment service in Vietnam.

Data from Ant Financial Services, an Alibaba affiliate that operates Alipay, showed that as of September 2016, the platform was already present in more than 200 countries and territories around the world, including Vietnam, supporting transactions in 18 currencies, including the dong.

This means the Chinese apps have managed to have Vietnamese merchants using their services before the official document signing.

Meanwhile, the Vietnamese government has yet to make any legislation about payment conducted via Chinese mobile wallets in the Southeast Asian country.

A leader from the State Bank of Vietnam said the central bank is in the process of proposing regulations on this new payment method to the government, asserting that the cooperation between Alipay and NAPAS is merely document signing with no immediate enforcement.

“The State Bank of Vietnam has not allowed any entity to make payment through the mobile applications of Alipay or Wechat in the territory of Vietnam,” the leader underscored.