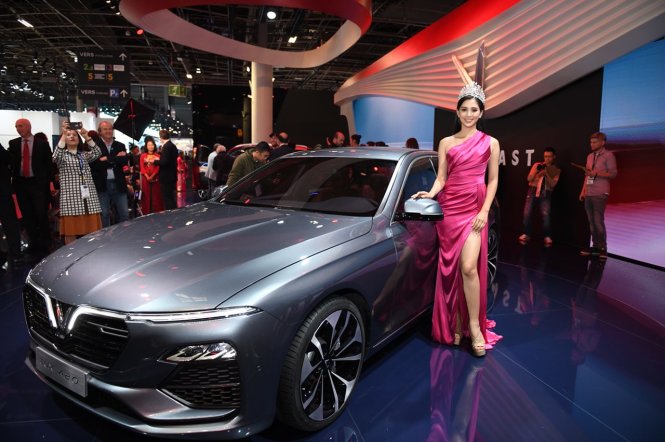 Vietnamese carmaker VinFast officially took the wraps off its sedan and SUV at the 2018 Paris Motor Show on Tuesday.

VinFast, the car-making arm of Vietnam's leading property developer Vingroup, is the first Vietnamese automaker to participate in a major international auto show.

Making a surprise appearance at the French event, the former England football captain David Beckham was on hand with the new Miss Vietnam 2018, Tran Tieu Vy, as they literally took the wraps off the Vinfast LUX A2.0 saloon and LUX SA2.0 SUV.

As a man also known for his collection of rare, valuable cars, Beckham shared his first impression of these cars.

“So beautiful. It’s incredible, I mean, to create something in such a short space of time is really, it’s really incredible, you know, it really is. VinFast is a miracle for Vietnam,” Beckham was heard saying in a live broadcast of the event on Vietnamese television.

Journalist Paul A. Eisenstein of CNBC's Detroit Bureau assessed that the designs of the cars are outstanding and attractive.

“For a new automaker, to have distinctive and impressive designs is very important,” Eisenstein said.

Eisenstein commented that the first made-in-Vietnam cars had their own characteristics, not shadowed by hundreds of other car brands.

Both cars are a bit of style thanks to their thin headlights and high-beltline emphasis and the way the grille's ‘wings’ stretch from the emblem to the headlights, VinFast’s design director David Lyon said at the launching show.

VinFast’s sedan and SUV were actually developed by Pininfarina's Italian design team and based on a BMW platform, for which Vinfast secured intellectual property rights.

The bodies and engineering underneath are actually a previous-generation BMW 5-Series sedan and X5 SUV, according to Autoweek.

With international motives, a performance to meet the operational characteristics of each country and region is quite limited, according to auto experts.

Therefore, the Vietnamese manufacturer has modified the original engine N20, which is in the list of the best engines in the world when launched, to suit the needs of Vietnam.

Nguyen Manh Thang, director of Whatcar, praised the two models are in the flow of the modern designs of European cars though they are ‘inaugural products.’

James B. Deluca, general director of the VinFast car factory, shared at the Paris opening that the two premieres were the day-and-night effort and a start from scratch of a Vietnamese corporation, traditionally focused on construction and real estate but now also present in the education, healthcare and agriculture sectors.

Only one year after Vingroup announced the start of construction of a 335-hectare car-motorbike production complex in Dinh Vu Industrial Park in the northern Vietnamese city of Hai Phong, a cluster of buildings and workshops have been erected close to the facility.

According to Shaun Calvert, deputy general director of production and production engineering at VinFast, the different categories inside its automobile factory have been basically completed and are in the stage of installation of the production line.

Calvert said the plant would have about 5,000 employees working in three shifts, producing 38 cars per hour, equal to 250,000 vehicles per year, once it is officially put into operation.

The factory was claimed to apply the 4.0 technology so that the information in the production process would be constantly updated, stored and analyzed.

Professor Tran Van Tho, a member of the Vietnamese prime minister's economic advisory team, hopes that VinFast will gradually create world-class products that are competitive in the world market but completely “made by Vietnamese,” not “foreign-made in Vietnam."

Tho also said that businesses with ‘brave investment’ in the production of Vietnamese cars like Vingroup should be applauded.