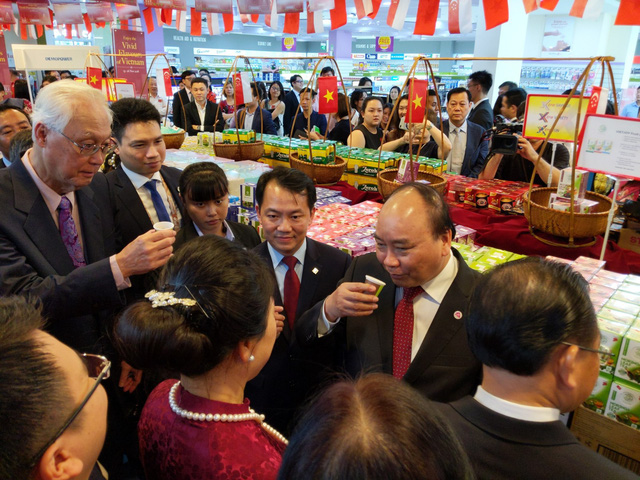 Vietnam’s Prime Minister Nguyen Xuan Phuc has officially commenced the Vietnamese Goods Week in Singapore within the framework of his ongoing visit to the city-state from November 13 to 15.

The activity was part of the Vietnamese’s premier trip to Singapore to attend the 33rd ASEAN Summit and related meetings.

Vietnam is the only ASEAN member nation to organize the fair on the sidelines of the summit.

Running from November 13 to 25, the Vietnamese Goods Week is aimed at promoting hundreds of Vietnamese agro-fishery products and commodities to Singaporean and international consumers.

Themed ‘Vivid Vietnam,’ the event is held by Vietnam’s Ministry of Industry and Trade, in coordination with Vietnamese retailer Saigon Co.op and Singaporean supermarket chain FairPrice.

It also marks the 45th anniversary of the two countries’ diplomatic relationship.

According to Minister of Industry and Trade Tran Tuan Anh, the Vietnamese Goods Week in Singapore offers chances to expand cooperation models between the two countries’ businesses.

There have been positive achievements in the cooperation between FairPrice and Saigon Co.op, Peng continued, adding that the ties will continue flourishing in the future.