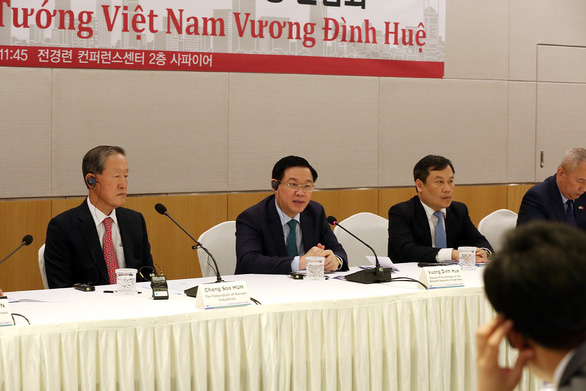 The Vietnamese deputy premier, who is on a June 16 to 23 visit to South Korea, took advantage of the business gathering at the headquarters of the Korea Financial Investment Association (KOFIA) to update South Korean investors on Vietnam’s policies and brief them on advantages in investing in Vietnam.

At the event, executives of Shinhan Financial Group and Alliex, a card processing system provider, expressed their interest in investing in intermediary and cashless payment, and peer-to-peer lending in Vietnam, while Korea Development Bank and Industrial Bank of Korea banks want to set up branches in the country.

In response, the deputy premier recommended that the South Korean banks consider buying restructured Vietnamese lenders or a financial company as the first step to start or increase their presence in Vietnam, for the government will not license the establishment of new foreign-invested banks until the end of 2020.

This policy is part of Vietnam’s effort to restructure its financial and banking system, Hue explained.

Vietnam therefore welcomes foreign buyers for such weak credit institutions that are being restructured as Ocean Bank, GP Bank and CBank, he added.

Deputy PM Hue also informed the South Korean bank leaders and financial firm executives that the State Bank of Vietnam is working to complete a legal framework to boost cashless payment and develop digital banks, creating a huge investment opportunity for businesses in the fields.

South Korean financial funds had poured US$3.5 billion into Vietnam as of the end of May, KOFIA chairman Jo Young Won told Thursday’s meeting.

Sixteen KOFIA members are actively participating in the securities market and infrastructural development projects in Vietnam, he added.