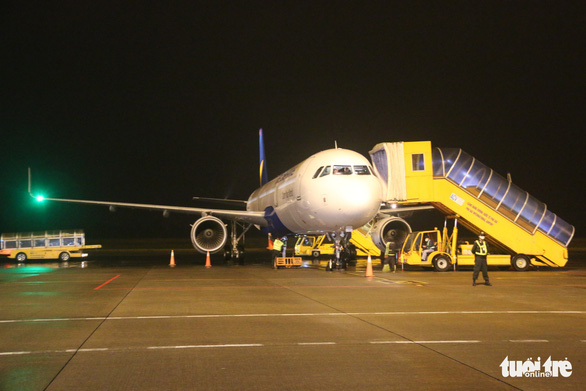 The provincial leaders and Vietnam Travel Aviation Co. Ltd. held a ceremony to welcome the plane to its new home, where the airline company is headquartered.

Upon the Airbus A321CEO’s landing at around 8:30 pm on Monday, the officials and Vietravel Airlines representatives presented flowers to the crew members before getting on the plane to take a look inside.

The aircraft has a capacity of up to 220 seats and a maximum flying range of 5,950km.

According to Vietravel Airlines’ chairman Nguyen Quoc Ky, the firm will quickly complete its fleet of three A321CEO planes.

The first aircraft arrived in Vietnam on December 5 and the remaining two are expected to come to the country on December 24-25 and January 10.

Speaking at the ceremony, vice-chairman of the provincial People's Committee Nguyen Thanh Binh said the event marked an important milestone in the service economy of the province.

Thua Thien - Hue pledges to create the most favorable conditions for Vietravel to implement its projects on schedule, thus helping the local service and tourism sectors quickly recover after the COVID-19 pandemic, he stressed.

Vietravel Airlines, based at Phu Bai International Airport, aims to serve one million passengers in its first year of operations.

It has a total investment of VND700 billion (US$30.15 million) and a lifespan of 50 years and is set to provide both domestic and international air transport services.