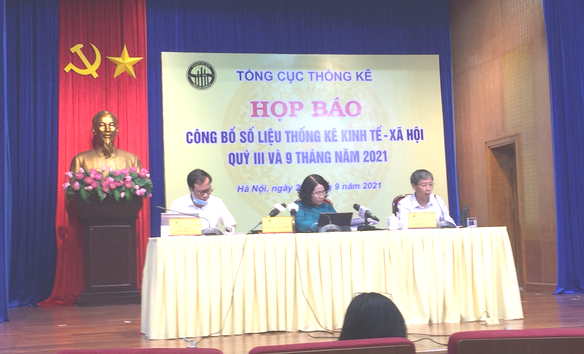 Vietnam’s gross domestic product (GDP) slid 6.17 percent year on year in the third quarter of 2021 as the government tightened social distancing measures to contain the coronavirus spread, marking the sharpest drop since the country began announcing its quarterly GDP figures in 2000.

Nguyen Thi Huong, head of the General Statistics Office (GSO), announced the figure at a meeting in Hanoi on Wednesday morning, attributing it to the stagnation of most production and business activities during the lengthy lockdown since the emergence of the fourth COVID-19 wave in the country on April 27.

The COVID-19 pandemic has seriously affected all aspects of the economy, Huong stated, adding many key economic hubs in Vietnam have been placed under strict and prolonged social distancing.

However, Vietnam’s GDP still expanded 1.42 percent year-on-year during the January-September period, representing the country’s effort to maintain business and production in the tough situation.

The nine-month GDP growth was largely driven by the agro-forestry-fishery sector with an expansion rate of 2.74 percent, contributing 23.52 percent to the overall increase.

The wholesale and retail sector fell 3.1 percent, the transportation and warehousing industry decreased 7.79 percent, and the accommodation and food service industry tumbled 23.18 percent.

About 90,300 enterprises withdrew from the market from January to September, up 15.3 percent year on year.

The GSO noted that this data may not accurately reflect the real situation as many businesses have not been able to carry out necessary procedures for their withdrawal due to movement curbs in multiple localities.

The pandemic has disrupted many production supply chains, especially those in Ho Chi Minh City, according to Pham Dinh Thuy, an official from the GSO.

“The number of businesses withdrawing from the market has never been this high,” Thuy added.

In the first nine months of this year, approximately 85,500 new enterprises were established, down 13.6 percent over the same period of last year.

Regarding future business trends, many enterprises specializing in processing and manufacturing still keep an optimistic outlook in the last quarter of 2021, GSO said.

Besides, the number of foreign direct investment (FDI) projects in Vietnam as of September 20 decreased 37.8 percent year on year, but their combined registered capital increased 20.6 percent.

Among 50.4 million people of working age in Vietnam, 2.91 percent are currently unemployed.

The unemployment ratio is 3.78 percent in urban areas and 2.39 percent in the countryside.

Between January and September, about 3.04 percent of the working-age population became underemployed.