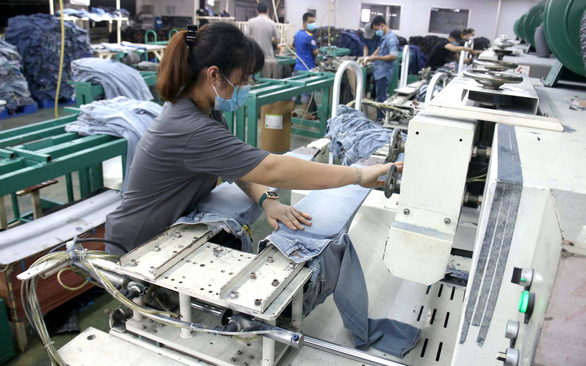 After taking a huge plunge in the second quarter due to a serious COVID-19 outbreak and related restrictions, Vietnam’s export value is poised to make a strong rebound in the last months of this year.

Despite facing multiple hurdles over the past year, Vietnamese businesses have consistently cooperated with the government to push back the coronavirus resurgence while also maintaining growth across sectors.

Trung An, an agriproduct distributor in the Mekong Delta city of Can Tho, recently announced that they have won a tender to export 15,000 metric tons of rice to South Korea -- their third contract signed with Korean partners this year.

The combined purchase volume of the company’s contracts is 45,000 tons of rice.

Trung An reported a turnover of VND500 billion (US$22 million) in the third quarter, down eight percent compared to last year, but it marked a 66 percent increase in pre-tax profit thanks to a focus on high-value rice varieties, said Pham Thai Binh, the firm's director.

Back in the second quarter, the company had faced many struggles due to the social distancing measures that Can Tho, among many municipalities of Vietnam, applied to address the worst COVID-19 outbreak the country has reported, which emerged on April 27 and has infected over 1.15 million patients so far.

Under the stringent movement restrictions that lasted for months in southern areas, many firms reported hardship in conveying inputs and shipping products.

Meanwhile, under the ‘three-on-the-spot’ model, which requires workers to work, rest, and eat at the same place to limit infection risks, firms would likely be required to halt production if they could not provide makeshift shelters for their employees.

However, as the rules were recently loosened, Trung An remains optimistic about their growth trajectory for 2021, with yearly export value projected at $30 million, a 67 percent surge from the 2020 figure.

According to Binh, South Korea is among the toughest markets for rice export, but recent achievements in quality certification, namely the Global GAP product standard that Trung An maintains with their partners in the Mekong Delta, have helped appease the Korean buyers’ taste.

The company has also set up a representative office in Germany in a bid to enter the European Union (EU) market, making use of the reduced import tax for Vietnamese products that the bloc approved under the EU–Vietnam Free Trade Agreement.

As rice trade shows signs of rejuvenation, wood export volume from Vietnam is picking up from the mid-year slump.

After facing logistic bottlenecks due to the social distancing mandates, wood exporters from Vietnam have recovered at a rate beyond all expectations over the past two to three months, according to Do Xuan Lap, chairman of the Vietnam Timber and Forest Product Association.

In a recent report, Vietnam’s Ministry of Agriculture and Rural Development pointed out more recovery signals.

Total export volume for agriculture, forestry, and fishery products in October reached $3.4 billion, down 15.6 percent year on year but a 4.2 percent increase compared to September figures.

The sum brought the total export value of the sector in the period to $38.75 billion, up 13.1 percent from last year.

At this rate of growth, the sector is poised to achieve its yearly export goal of $44 million by the end of December.

Diep Thanh Kiet, deputy chairman of the Vietnam Leather, Footwear, and Handbag Association, said leather manufacturers in Vietnam are financially exhausted due to the coronavirus outbreak.

The longest phase of social distancing in Ho Chi Minh City, which lasted some five months until October, disrupted the linkage between the southern metropolis and surrounding provinces in the southern key economic region.

In light of the situation, support policies should focus on helping firms retain workers, re-recruit employees that quit during the outbreak, and bring back skilled staff from surrounding provinces to Ho Chi Minh City.

During a time of great difficulty, many businesses have managed to rise to the occasion, one of which is Phuc Sinh Group, a coffee manufacturer that reported gross revenue of $200-300 million per year.

Thanks to careful preparation, the firm kept its production chain running through the previous social distancing bout, with outbound shipments sent to over 100 countries, according to Phan Minh Thong, CEO of Phuc Sinh.

Fimex Vietnam, a shrimp exporter, also kept itself afloat through the epidemic thanks to swift adaptation to new circumstances.

Ho Quoc Luc, chairman of Fimex, pointed to the requirement of screening all workers for COVID-19 every time a new infection is detected in the locale, which cost them a lot of money and piled up the struggles.

“I hope that leaders of other shrimp processing facilities can hold their ground and prevent the supply chain from collapsing,” Luc said.