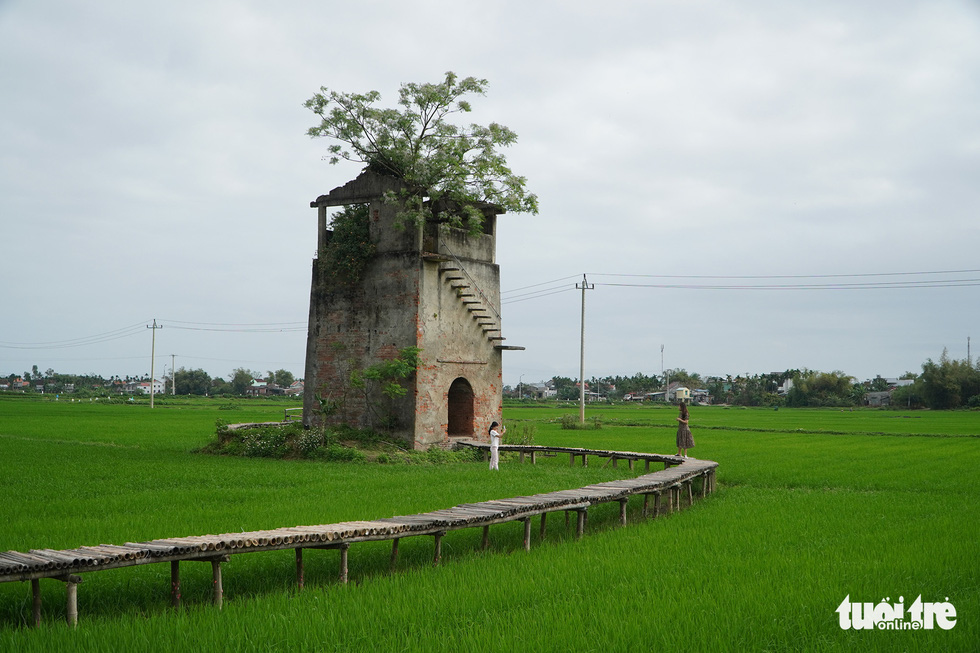 In the middle of a rice field of Vinh Nam Village, Duy Xuyen District, Quang Nam Province stands an old brick kiln which might have been 'dormant' forever if not for an intelligent woman taking a look at it one day.

"I have passed by the field many times," recalls Le Thi Thanh Nga, 36, the special woman.

"When I saw the old brick kiln in the middle, I became curious.

"So I discussed with my husband a plan to buy it although many people said I was crazy to do such a thing."

The couple decided to leave the city and move to the countryside for a career.

After acquiring the old brick kiln, they are able to convert a fallow field into fertile land that grows a high-value variety of rice, high-quality organic vegetables, and even a check-in destination for tourists in central Vietnam.

Finding a way with black rice

Nga and her husband, Boonlert Kamyai, own a two-hectare lush green rice field that lay fallow a few years ago in Vinh Nam Village.

Boonlert, a Thai national, is an animal husbandry engineer.

The couple have traveled to many countries around the world to learn how farming is done there and what initiatives they can apply in Vietnam.

After such learning trips, the two share the feeling that Vietnam has ample potential for agriculture that has yet to be adequately unlocked.

"We have large arable land, but the negative habits of farming and abusing chemical fertilizers have done so much damage that more and more fields are lying fallow," said Boonlert.

"I know that in many other countries, every square meter is a valuable natural resource.

"That's why farmers can get the most benefits from their land.

"We should change our way of farming."

After buying the old brick kiln, the couple rented a two-hectare field to test six types of rice with their organic farming method.

Then Nga decided to grow black rice, which is suitable for the characteristics of the field and was not ever grown in the community.

"The black rice variety has high nutritional value and contains substances that can prevent cancer, among other things," Nga claimed.

"Moreover, it can be sold at a high price since it is not grown by anyone else."

In 2020, Nga and her husband grew black rice in their two-hectare field and took care of it according to the organic farming method.

They do not use chemical fertilizers but organic compost to spur the rice growth. They grew the rice 20 centimeters apart.

"We cultivate the rice in several rows, and 15 days after that we bring ducks to the field to drive away wild weeds, slugs, and moths," Nga explained.

The black rice can be harvested after about 120 days of cultivation.

Nga tends to her black rice field in the same way as other farmers. The biggest difference is that she applies an organic technique and shuns chemicals.

She raises ducks and fish to eliminate the golden apple snails and utilizes a homemade organic pesticide to kill the moths.

This way, her rice is completely clean after being manually harvested to avoid mixing with other rice varieties.

"Our ducks eat the golden apple snails and harmful insects, and their waste then becomes organic fertilizer that benefits the rice," she said.

"The ducks can move between the rice rows and make the soil more permeable.

"When the rice matures, the ducks can also be sold, providing a double benefit."

Expanding the area under cultivation

There are four workers who help the couple with various agricultural tasks. Nga and Boonlert live in a makeshift camp built in the middle of the rice field, next to a pond filled with lotus flowers where fish are raised.

After some trial cultivation, they can now harvest twice a year, with average productivity of five metric tons of paddy on each hectare, equivalent to three metric tons of rice.

Although its productivity is lower than other rice varieties, black rice is sold at a price five times higher than other varieties.

Nga has not only grown the rice differently but has also tried to find ways to churn out other products from her black rice to make a bigger profit.

"I have noticed that farmers often sell raw rice after harvest, which only benefits traders and transport companies, but not the farmers," Nga said.

"We need to develop our own branded products that will help black rice gain more value," said Boonlert.

They have set up a production facility to package the black rice and are working with some partners who use the rice to turn out various products such as tea and alcohol, which they sell at a higher price.

Nga called their black rice 'Lo Gach Cu' (Old Brickyard), while other side products such as the tea 'O Me Cha' or the alcohol 'O Me Tuu' have also gained traction.

Due to their great love for the old brick kiln, the couple have turned it into an interesting tourist destination after renovating it, building a bamboo bridge to it and connecting it with power lines.

Lo Gach Cu Farm Stay attracts thousands of people, including many young visitors who want to check-in and pose for photos.

In the next steps, the couple have transformed their old brickyard and the surrounding field into a destination where visitors have the opportunity to work in the field, fish, and enjoy daily countryside foods such as rice, alcohol, and tea made from black rice.

They also plant flowers and organic vegetables while building some bungalows for visitors.

"I display our products here and many of the visitors feel like trying them at our farm," Nga said.

"Afterward, they can order the products online and have them conveniently delivered to their homes.

"Then they go on to tell their friends and acquaintances about our farm."

On normal days, the Thai-Vietnamese couple receive about 100 visitors, but on holidays, that number can be 300 or 400.

Nga intends to coordinate and share cultivation techniques with local farmers in order to increase the black rice-growing area.

She hopes to help them change their farming methods to increase the value of agricultural produce.

"If we just grow rice in a paddy field, it's like holding a piece of gold in our hands without knowing what to do with it," Nga said.

According to Nga, she and her husband are just in the first phase of product introduction and promotion, although they are already making some profit.

Nga plans to hold a weekly market in her field where local farmers can showcase and sell their agricultural products. In this way, farmers can both market their produce and meet their potential customers.

The couple's Lo Gach Cu black rice has been certified with the three-star OCOP (One Commune, One Product) standard.

In addition, Lo Gach Cu Farm Stay was praised by Quang Nam Province as an innovative start-up project for 2020.

Nga provides jobs for four local workers with a monthly salary of VND6 million (US$263).