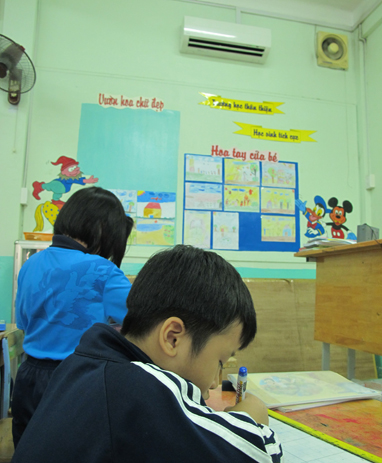 Air conditioners are originally intended to bring comfort, but at many Ho Chi Minh City public schools they prove to be a nuisance, as parents are currently in a dispute over whether the equipment should be installed in classrooms.

In this tropical city, students suffer in hot classrooms equipped only with fans, so many parents wish to install air conditioners.

The well-off are more than willing to chip in for their kids’ comfort, but the poor cannot afford the extra costs, and argue it is unnecessary.

Rich parents push hardest for the installation of air conditioners in elementary schools to ensure their coddled kids study in a comfortable environment.

A parent whose child is enrolled at such a school in District 7 says that it is a bargain to buy the machine because the children will benefit from it for as long as five years.

“Two air conditioners cost a mere VND20 million (US$947) so for a class of 40, each parent would only have to pay VND500,000,” the parent says. “The kids will study for five years in the same classroom before they go on to middle school, which means we are contributing a mere VND100,000 per year.”

Another parent, Thu Tam, recalls one parent’s argument for air conditioning was because so many children are crammed into one small classroom.

“I myself can afford such equipment at home so why can’t dozens of us do it for our kids?” Tam quoted the other parent, whose child is studying at a famous elementary school in District 1.

But many others have refused to pay, saying air conditioners are a luxury for them.

Some parents at Thien Ho Duong Elementary School, located in District 10, have rejected suggestions by their rich peers who would like to purchase air conditioners for several classrooms.

The opponents argue that the classrooms are already sufficiently open to air and light, and therefore air conditioners are completely unnecessary.

Vietnamese public schools now have a policy that parents must pay for extra facilities, like air conditioners or interactive boards, in addition to basic amenities sponsored by the government.

The pilot reopening of in-person classes for grades 1, 9, and 12 will last for two weeks