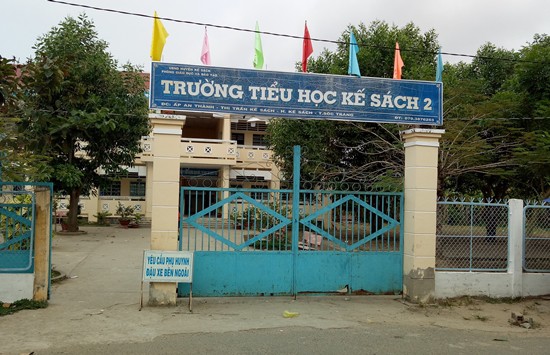 The Vietnamese educational climate has somewhat suffered from recent instances of improper behavior by a teacher and a student reported in elementary and secondary schools.

A teacher at Ke Sach 2 Elementary School in Ke Sach District, Soc Trang Province was fired on March 7 after he was accused of sexually harassing one of his female students, a fifth grader.

About two months ago, the girl’s grandmother filed a complaint against her teacher, Nguyen Thanh Trang, after finding unusual signs from her.

The student hesitantly said Trang had physically touched the sensitive parts of her body.

The man admitted his wrongdoing, but said that he considered the student as his child or grandchild only.

The local government condemned him for violating the “professional code of conduct” and “causing serious consequences,” dismissing him accordingly.

In another case, an eighth grader in Ben Tre Province supposedly pressed his female teacher’s neck with his bare hands right in the class session after being verbally impolite to her.

According to preliminary information, on March 2, Cao Thoai Nhu, a teacher at Tan Thach Middle School in Chau Thanh District, asked a student in her class to put away the material of a different subject to focus on English, the subject she was teaching.

The student refused to obey the teacher, who confiscated the material as a result.

The student showed no reaction of disagreement over the action, but a male peer behind, N.V.M.T., rose to his feet and hurled angry offensive language at Nhu, who then asked for help from her two colleagues.

The male student continued shouting at her before squeezing her neck in the classroom.

Only when others intervened did he halt the violence.

The actual occurrence and cause are being investigated.