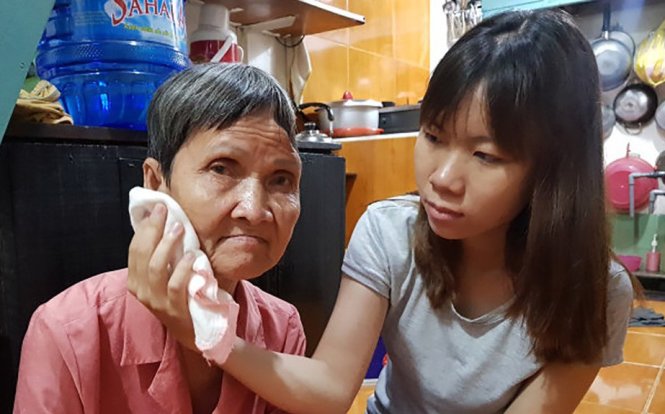 A Vietnamese student feeding her entire family resolved to enter college after refusing to be admitted to another higher-education institution to work for two years due to financial adversity.

Luu Bich Ngoc has eventually become a college student again, leaving two years spent on making money behind but facing many difficulties ahead.

Ngoc comes from an underprivileged family background, with her father abandoning her and her mother, who is now living in a different place, getting married again, when the student was just an infant.

She was since cared by her maternal grandparents in a small rented room in District 12, Ho Chi Minh Chi City.

The grandmother worked as a lottery ticket street vendor to keep the family alive before being hit by a motorbike, which gave her a brain injury when Ngoc was in grade six, and has rendered her housebound.

The grandfather, who has also been incapacitated due to valvular heart disease, initially wanted Ngoc to drop out as the family had sunk in dire straits at the time, but he later banished the thought because of realizing how excellently the girl fared at school.

Following the incident to the grandmother, the female cousin of Ngoc who lived in the family began a job at a factory to earn money.

The relative’s modest income was able to pay for Ngoc to study until she was a twelfth grader, during which time she achieved a commendable academic performance in every school year.

The burden of tending the grandparents shifted to Ngoc when the cousin got married and lived in another place.

The change took place right at the time when Ngoc was prepared to go to college at 18, forcing her to shelve the education plan to spend two years sewing clothes at a factory and serving as an office worker for a local firm.

She cried multiple nights out of self-pity but consoled herself with the thought that she still had somebody to love and tend, unlike many unfortunate people out there.

The desire for learning at university was so intense that Ngoc tried to search for materials for college entrance examinations and revise for the tests.

She said she was often discouraged by her grandparents’ frequent illnesses but hopes for a brighter future spurred her on.

This year she was admitted to the Banking University in Ho Chi Minh City as an accounting major but her grandfather was worried about the path she is going to tread.

Ngoc borrowed over VND10 million (US$430) to cover tuition fees for the first semester and is planning to seek part-time jobs to work her way through college.

“I have to try whatever difficulty is. I’ll never let my education be disrupted again,” she said.