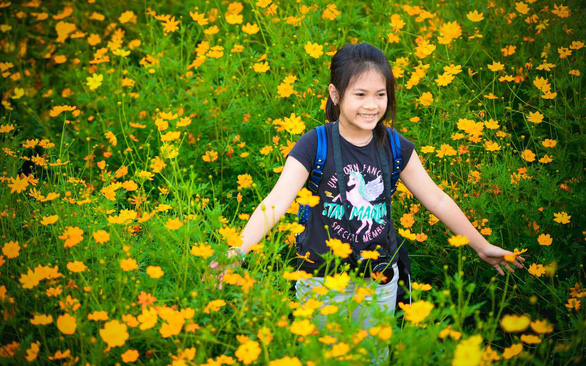 A Vietnamese girl who will enter grade six after this summer has received positive responses to her call for the headmasters of 40 schools in Hanoi to put an end to the ‘tradition’ of releasing balloons to mark a new academic year.

In Vietnam, schools usually have students release balloons to the sky to mark the start of a new academic year at the school-year opening ceremony, usually held in early September.

But Nguyen Nguyet Linh, a Hanoi student who will begin grade six at Marie Curie All-through School this September, says the tradition takes a toll on the environment, given the fact that balloons are made of rubber.

“When balloons are released, they can be accidentally swallowed by birds and other animals, blocking their digestive tract and causing them to die from hunger,” Linh wrote in an email sent to the headmasters of 40 schools in the Vietnamese capital on Wednesday last week.

“If the balloons end up in the ocean, sea turtles and other sea animals can mistake them for jellyfish.”

The young student said ribbons and rubber bands used for tying up balloons can also choke animals and kill them, thus proposing putting an end to the long-standing tradition with such a huge environmental impact.

“Or may I suggest at least reducing the number of balloons being released?” she wrote.

Linh and her letter made national headlines last week, and at least three headmasters have said they will not have any balloon release at the academic-year opening ceremonies at their respective schools.

Do The Phuong, headmaster of Hong Ha Elementary School in Binh Thanh District, Ho Chi Minh City, made the commitment even though he is not among the recipients of Linh’s email and only learned of her call via the media

“Our school holds the balloon release every new school year but with only a few balloons,” Phuong said.

“There will be no balloons sent to the sky at this year’s back-to-school ceremony.”

Phuong added that the school will also take advantage of the ceremony to spread awareness of environmental protection among students.

“The message is that environmental consciousness can be spurred from even the smallest things,” he said.

Even Linh’s family was surprised by her call for change.

“I was quite astounded when Linh told me the other day that she would no longer play with balloons because they would become plastic waste,” Le Hoang Minh Nguyet, Linh’s mother, said.

As her daughter also expressed her concern about school’s releasing balloons at opening ceremonies for every new academic year, the mother suggested she write those thoughts and concerns down, according to Nguyet, a lecturer at National Economics University in Hanoi.

The 11-year-old eventually decided to pen an email and looked online for the email addresses of different schools in Hanoi and sent it to the headmasters.

Nguyet admitted that she also shared the letter on her Facebook page, believing that it would not work ,“for no headmaster would ever pay attention to a call from a child, let alone agree to make a change.”

But the mother was wrong.

As of Friday, Linh’s email had received four replies, according to Nguyet.

According to Linh’s head teacher in her fifth grade, Linh’s family is keen on taking her to see different parts of the world and every time she comes back from a trip she would write about things that thrilled her.

“I used to choose the best articles and sent them to the school’s newspaper,” Ha said.

“The editorial board even paid Linh for the works that got published.”

Linh’s mother believes that every child needs to be educated differently.

“I don’t want to trap my child in the house with electronic devices but would rather take her out to experience nature, visit museums, meet people, and see different lives,” Nguyet elaborated on the way she educates her daughter.

“I also let my daughter participate in environment-protecting activities and encourage her when she wants to spend time on things she likes such as photography, painting, and movie production,” Nguyet said.

The mother said that while she is happy Linh’s email to headmasters has gone viral, she and her family only want the public to “focus on reducing plastic waste to protect the environment rather than focusing on Linh.”

Nguyet added even though her daughter is still young, her environmental awareness is quite strong.

When Linh participated in a moviemaking course, the girl chose the environment as a theme of her short production that encouraged the reduction of single-use plastics.

Many people may not believe an 11-year-old student could have such mature thinking and eagerness to change others' actions.

However, once they listen to Linh’s story and get to know how she was raised, they would realize it takes a journey for a girl like Linh to be responsible for her surroundings, be passionate about a social issue, and have such compassion.