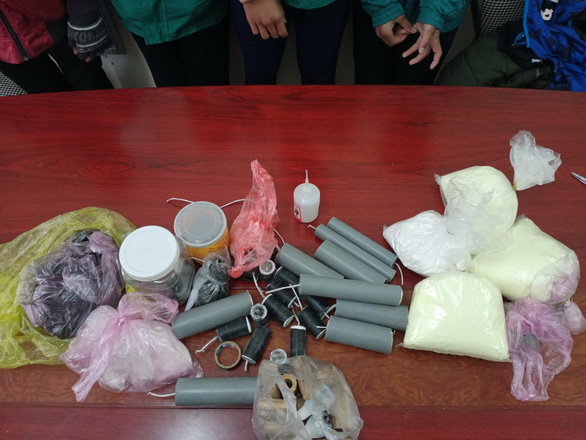 Authorities in north-central Nghe An and Ha Tinh Provinces have continuously handled cases related to creating or playing with handmade firecrackers among local students in recent days.

In Ha Tinh, the authorities have discovered five cases, involving ten students, of homemade firecrackers, seizing 9.2kg of flash powder and 20 firecrackers from November 15 to date, according to the provincial police.

For the latest case, police in Ha Tinh’s Duc Tho District found T.Q.L., 16, hailing from Tan Dan Commune storing 300 grams of flash powder -- the main ingredient of a firecracker -- in Tung Anh Commune on December 20.

L. admitted that he had purchased the aforementioned amount of explosive compound from V.D.P., 16, living in the same commune.

A raid on P.’s house uncovered 400 grams of flash powder, 300 grams of sulfur, and dozens of firecrackers already wrapped in paper, which he had bought online.

P. said he sold parts of the handmade firecrackers for money and kept the remaining for Tet celebration, according to Nguyen Thanh Chung, team leader of the Duc Tho District police bureau.

According to Chung, the firecrackers created by P. are dangerous as they explode with loud bangs and high damage.

They also confiscated 1.5kg of sulfur, 1.14kg of potassium chloride salt, flash powder, and 24 homemade firecrackers at these students’ houses.

The students said they had purchased these ingredients and aped the way of making the firecrackers online.

They seem to have learned no lesson from serious accidents in Ha Tinh and Nghe An Provinces, where several teenage students created and played with homemade firecrackers.

On the afternoon of January 29, 2019, six people were injured and D.V.L., a ninth-grade student, died in Duc Tho District’s Bui La Nhan Commune after L. tried to make handmade firecrackers from chemicals he had bought online.

Most recently, C.T.Tr., 14, and C.T.H., 15, were badly injured while the two brothers were playing with firecrackers at their grandmother’s house in Vinh City, Nghe An Province at about 2:00 pm on January 3.

H. had his left hand completely damaged while Tr.’s lips, cheeks, and eyes were burned after the explosion.

“In addition to the responsibility of the schools, parents need to join hands to control and supervise their children's use of the Internet, advising them on the harm of making firecrackers, in order to avoid undue consequences for themselves and family,” said Tran Trong Khiem, principal of Cuong Gian Middle School in Nghi Xuan District, Ha Tinh.

Vietnamese law prohibits all of activities related to the production, trading, transportation, import, export, storage, and use of firecrackers and fireworks and materials thereof, except for some specific cases.

The government recently amended a decree, which will take effect on January 11, allowing all Vietnamese light up fireworks for some special events such as Lunar New Year festivals, birthdays, wedding ceremonies, conferences, grand openings, anniversaries, and cultural activities.

However, the fireworks allowed are the kind that will not explode.