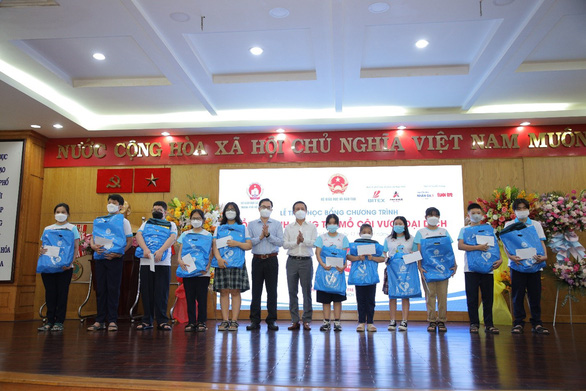 The Vietnamese Ministry of Education and Training, alongside two subsidiaries of Bitex Group, has announced it will award 800 scholarships worth a combined VND10 billion (US$440,238) over the next five years to local children who lost at least one parent to COVID-19.

The ministry, Binh Tay Import-Export JSC, and Anh Khue Watch JSC on Tuesday presented 400 scholarships to children who lost at least one of their parents since the beginning of the latest coronavirus outbreak in Ho Chi Minh City.

The remaining 400 scholarships will be awarded to children in Dong Nai province, Binh Duong Province, and other localities across the country.

“The scholarship will help pay for the education and daily needs of those children who lost one or both parents so that they can have some stability in their lives," Dr. Tran Van Lam, an official from the education ministry, said at the sponsorship event on Tuesday.

"We hope it will reduce the burden and pain of losing their loved ones.”

The children supported by the program will receive need-based aid until they turn 15 years old, according to Nguyen Xuan Dung, chairman of Bitex Group.

A different level of sponsorship will be provided when they are between 15 and 18 years old.

At Tuesday’s event, several of the scholarship recipients took the stage to tell their stories.

“After the death of my father, I was so sad," said Nguyen Le Ngoc Anh, a third grader, whose grandmother and father died of COVID-19.

Anh is now living with a sick mother and a 15-month-old sibling.

"My mother and the whole family were very worried about me, but now many people seem to understand what I’m going through, so they help me to feel better,” she said.

Duong Tien Thanh, a ninth grader whose mother died of COVID-19 about five months ago, thanked the sponsors for consoling him and motivating him to study hard for a better future.

The latest coronavirus outbreak has taken away the parents of 1,517 students in the southern metropolis, according to the municipal Department of Education and Training’s statistics announced in September last year.

During the ongoing flare-up, more than 2,500 children across the country have lost parents, according to Suc Khoe & Doi Song (Health & Life), the mouthpiece of the Ministry of Health, which cited the Ministry of Labor, War Invalids, and Social Affairs last November.