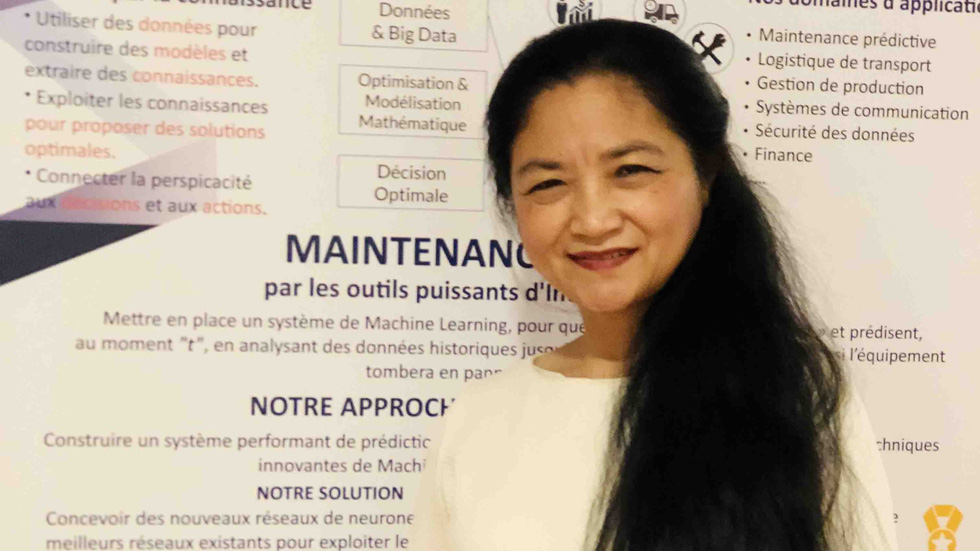 Vietnamese scientist invents one of the most popular algorithms

The year 2021 marked the event of Dr. Le Thi Hoai An's 30 years of living in France. Together with her husband, Dr. Pham Dinh Tao, she has successfully developed an optimization algorithm that is increasingly used worldwide.

"There is an interesting fact that not many people know: Everything in our real world can be represented by mathematical language," Le Thi Hoai An said.

"This means that we do our best to find the most effective way to perform an activity with the best performance and the lowest cost. Our research area is focused on this issue," she added.

Prof. Le Thi Hoai An works at the College of Lorraine in France, where she received the highest award for a professor in an EU country.

There is a quote from a French philosopher that has stuck in her mind: "All existing things in the world are the result of inevitability and chance."

She has been thinking about this for the past decades that she has lived and worked.

One of her accidental experiences in the past is her decision to learn French from her own mother, Nguyen Thi Loc.

At a time when French was not a popular foreign language, her study of French was truly accidental, which led to a turning point in her life when she later received a scholarship to France. It was the scholarship that completely changed her life.

There is also a special fortuitous "division" among Hoai An's four siblings. While two of them pursue their father's career as a literature professor, the other two wanted to study in the same field as their mother and become natural scientists.

Of course, it was not a random decision that Hoai An married Prof. Pham Dinh Tao, who is her teacher, friend, and colleague in their common scientific passion: DC (Difference of Convex functions) programming and DCA (DC algorithms).

The pair "gives birth" to a famous algorithm

In fact, DC Programming and DCA were introduced in their preliminary form by Prof. Pham Dinh Tao.

While there were many PhD students who wanted to further develop Tao's algorithms, there were no outstanding achievements until his wife, Prof. Le Thi Hoai An, began her PhD work with further research in DC Programming and DCA.

She has contributed so much to her husband's algorithms by making some of the most important breakthroughs in her husband's scientific field.

It is Hoai An who contributes to developing and changing Programming and DCA in a remarkable way.

Thanks to her valuable solutions to Pham Dinh Tao's algorithms, Hoai An was able to successfully complete her Doctor of Philosophy (PhD) in only two years and three months, and only needed two and a half years to obtain her Doctor of Science.

This is indeed an extraordinary achievement, considering that a PhD in France takes an average of eight to ten years between the two stages.

DC Programming and DCA are the "very successful child" of the couple, who have gained a foothold in various industries over the years, particularly in the fields of data science and artificial intelligence.

The two Vietnamese scientists are immensely proud of having created their own field of mathematical science.

Hoai An said she is incredibly happy that her scientific achievements have been increasingly applied in various production processes and management in many large corporations in France and other countries.

She also takes part in the unmanned aerial vehicle (UAV) management and operation projects of the NAVAL group, which is closely associated with the French Ministry of Defense.

Faced with new demands resulting from current technological innovations, especially in the field of Big Data processing, the couple is busy improving and perfecting its algorithms in the hope that they will be suitable for more users.

"For me, DC Programming and DCA are not just algorithms, but also a philosophy, a different approach to developing a family of algorithms. Also, a powerful algorithm cannot solve all problems in the same way.

"Therefore, we try to do more research to adapt our algorithms to each problem that needs to be solved," Hoai An added.

"Being able to do what I am interested in and maintain an ongoing passion for what I am doing," the veteran scientist said when asked what has made her most proud so far.

Contributions to applied mathematics in Vietnam

Mathematical optimization (or mathematical programming) is a branch of applied mathematics that is a combination of mathematical science and specialized knowledge from various fields such as biology, finance, economics, and computer science.

Noticing that this field of mathematics is not as popular in Vietnam, Hoai An dreamed of setting up a course of study in Vietnamese universities.

After many years of teaching Vietnam’s postgraduate and doctoral students in applied mathematics, she successfully set up a data analysis and optimization laboratory at the International School of Vietnam National College in Hanoi.

She has trained 25 PhD students in applied mathematics for Vietnam, including 16 individuals who hold important positions in prominent universities in the country, and four PhD postdocs who have graduated in France or the U.S.

. She won the medal of the "Ordre des Palmes Académiques" awarded by the French government.

. She was honored with the Constantine Caratheodory Prize in 2021 by the International Society of Global Optimization. She is the first mathematician in France, the third in Europe, and the tenth in the world to receive this prestigious prize.

. Hoai An was also named a senior member of the Institut Universitaire de France (IUF).