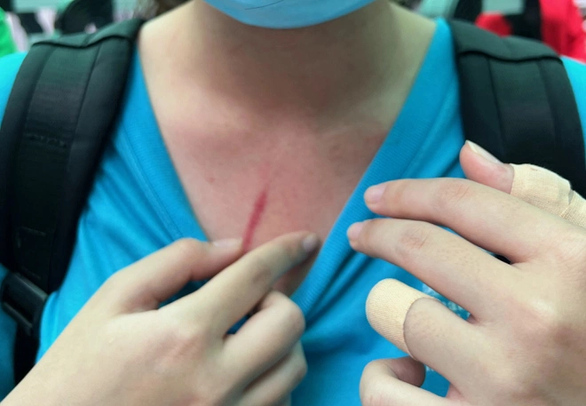 The principal of an international school in Ho Chi Minh City has submitted a report to the municipal education department regarding a violent incident involving some of its students which has garnered a lot of attention on social media over the past days.

In the report sent to the Department of Education and Training on Sunday, Kim Sharee Green – head of International School Ho Chi Minh City (ISHCMC) – stated that the school was partly responsible for letting such an unfortunate incident occur, which also resulted in concerns among parents.

The school will learn from this experience so it will promptly handle similar cases to prevent misunderstandings and inaccurate information on social media.

The school is concerned that relevant parties may abuse social media and live streams to incite online bullying by spreading some personal information of the students, and hopes that the education department will assist in preventing it from happening.

It was referring to one of the parents live-streaming on Facebook to criticize the way the school has dealt with this case.

ISHCMC commits to closely monitor students, both academically and psychologically, and work with parents to find a satisfactory solution to help the students deal with psychological tensions and resume their studies.

After classes ended that day, the teacher in charge was informed that a group of students had been fighting at the location about two blocks from the school.

The teacher then took these students back to the school, where they underwent a health check-up at the medical room.

The school administrators later met the students and asked them to recall the incident.

The process was disrupted when the parents of these students arrived at the school and demanded that it immediately handle the case and discipline the student responsible.

The school administrators were unable to make a decision at that time because they had not gathered enough information about the incident.

They tried to explain it to the parents but the latters refused to cooperate.

Information about the scuffle among students at ISHCMC-AA has been shared widely on social media over the past days.

T.H.T., whose daughter studies in seventh grade at ISHCMC-AA, claimed that the student was attacked by a girl, who studies in eighth grade at the school, on Thursday.

The three friends of T.’s daughter were also injured as they tried to intervene.

On Saturday, the Ministry of Education and Training asked the Ho Chi Minh City administration to direct relevant agencies to deal with the fighting at ISHCMC-AA.