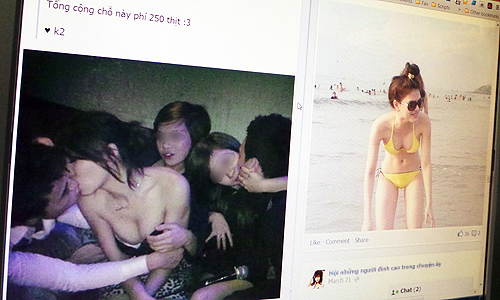 Pornography, sexual images and nudity have become rampant on Facebook, with most of the account users being young people, including teens.

They post nude images of themselves or with girlfriends or boyfriends to attract ‘likes’ from the online community. Some even promise that they will keep posting sex clips if they receive 30,000 ‘likes’.

Several days ago, a young man named Manh Tran posted public pictures of himself and his girlfriend wrapped in a bath towel with the caption, “If we get 30k ‘likes’ we will post our clip, OK darling?”

On the page called ‘truyen nguoi lon’ (adult stories), its administrator confirms that “the page contains an abundance of sex stories which ensure to please the sex-mad.”

In addition, you can find communities or groups with tell-all names, such as ‘gai goi’ (callgirl), and ‘Hoi thich gai chep’ (for guys who like girls for sex). Even the pages of some groups with romantic names such as ‘Ai quan tam ban nhieu nhat’ (Who loves you most) also contain many sexual pictures of girls in bikinis or totally nude.

On the ‘Who loves you most’ page, which has over 725,000 members, a female user named Yen Nhi posted a link called ‘Clip nong sinh vien vao hotel’ (Hot clip of students in hotel). Nhi’s page has 4.5 million members.

Similar groups and communities have mushroomed on social networks, where a user only needs a few minutes to set up their own page.

Young members may be easily swept away by these pages with sexy pictures. Without being warned by parents, teens may fall victim to sexual predators and other dangers.

With internet connectivity booming, parents have just the right way to help their teen sons and daughters avoid falling victim: by taking time and playing with them.

It is ineffective and dangerous to use software to prevent teens from accessing these pages, as they have hands-on knowledge of the internet, admitted Nguyen Tam Trung – an IT lecturer in Ho Chi Minh City.

Trung said he used the software when his son was still young and now his solution is ‘playing with my son’. He helped his son set up a Facebook account and advised him on the nature of sexy websites.

Interestingly, the fight against sexy pages on Facebook has actually been aided by many young members.

Blogger Nguyen Ngoc Long said that posting sexy pictures violates Facebook regulations and any user can ‘report’ the pages and they will then be shut down.