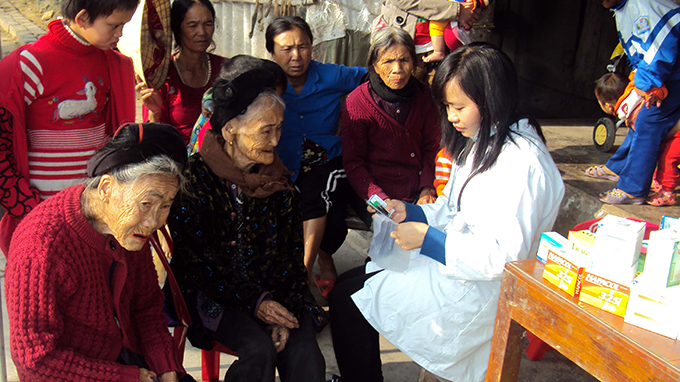 Life is never easy, but it was even harder for a young woman who was born to a family of street beggars in central Vietnam. However, with tremendous effort and a strong will, she has ended the “beggar tradition” of her family and achieved her childhood dream of becoming a doctor.

Twenty-seven-year-old Nguyen Thi Hien’s parents, grandparents and siblings were once mendicants in a poor village in Nghe An Province.

During her childhood, Hien’s mother carried her on her back while she begged for money at train stations and markets for many years.

When Hien was eight years old, she started feeling the shame of being a panhandler and so asked her parent to allow her to go to school.

Ten years ago, when Hien was in 11th grade at a high school in Yen Thanh District, she cycled dozens of kilometers on a daily basis to collect and sell firewood to support her parents.

Since each bunch of firewood earned her a mere VND5,000 (roughly 2.4 U.S. cents), Hien switched to farming, which she believed would earn her more money.

Despite adversity, Hien remained one of the best students in her school, from 1st to 12th grade. “When the 1993-1994 school year began, I saw a skinny little girl in ragged clothes standing in front of my class gate,” Bui Thi Ha, the first-grade head teacher of Hien, recalled.

“After learning of her poor circumstances, I encouraged her family to allow her to go to school,” said Ha. “To my surprise, she was very smart and was one of the two best students in my class. She sang well too.”

She passed the university entrance exam in 2005 with high scores and was admitted to the Faculty of Pharmacy at Thai Nguyen University in the northern province of Thai Nguyen, where she was awarded scholarships to study tuition-free for six years.

When Hien was a child, she dreamed of being a physician to help poor people since she had watched many neighbors in her hometown die of cholera.

She graduated from her university in June 2011 with a credit-ranked degree. Hien is now studying in an MA course also in pharmacy at the Ho Chi Minh City Medicine and Pharmacy University and is scheduled to defend her thesis next year.

Hien is currently working part-time at a private hospital in the southern city to afford school fees for the graduate course. “I only have enough time to go to the market to buy food,” she said.

In spite of having a tight work-study timetable, Hien still dedicates her weekends to volunteering at charity organizations which offer free medical diagnosis and treatment to poor patients across the country. She also takes time to give medical care to the elderly in her hometown.

“The support from many philanthropists has changed my life, so it’s time for me to pay back to society by doing what I can,” she asserted.