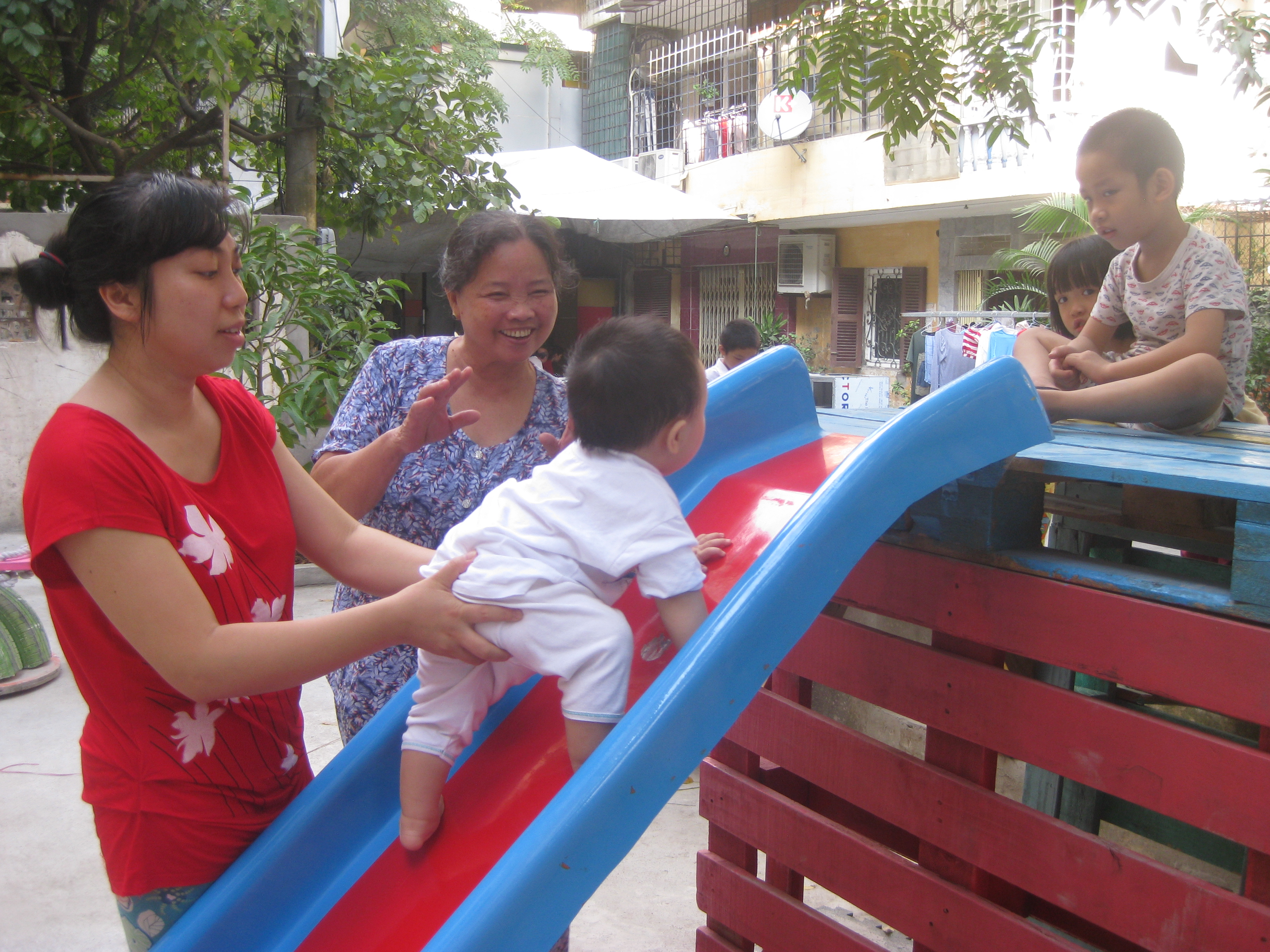 A 70-year-old woman in Hanoi raised funds and took care of the construction of a free playground for kids in her neighborhood, while a recently retired traffic policeman also in the capital is highly revered for his kindness and good deeds, including saving the lives of traffic accident victims and suicide attempters.

Tran Thi Van, 70, head of Quarter 30 in Hanoi’s Dong Da District, has turned a 112m2 plot into a free playground for kids in the neighborhood.

Though the playground is small and the simple toys are mostly self-built, scores of children in her quarter and others in the vicinity throng the place every afternoon and weekends.

The playground serves as a wholesome outlet for the children after hours of hard studying and an outdoor alternative to digital device, which the majority of today’s kids have abused in recent years.

A social survey launched in October this year by the Research Center of Culture, Education and Social Life under the Ho Chi Minh City Ethnology and Anthropology Association reveals an alarming fact: up to 78% of kids under six years old use digital device.

Conducted in four major cities of Hanoi, Da Nang, HCMC and Can Tho, the survey gathered replies from 1,051 respondents, who are parents of 1,802 kids from three to 12 years old.

Several years ago, Van, who lives alone as her husband passed away some 10 years ago, began nurturing a plan to build the playground by making use of the space between two abandoned pump houses.

However, she could not implement the plan then as she was not in charge of the quarter which has the plot.

As soon as she is tasked with taking care of the quarter in October this year, she persuaded the 122 households about her plan to build the playground.

Her plan first met with oppositions from a number of residents, and she also had great difficulty in raising funds.

Undaunted, she was set on turning her plan into reality and the playground, which costs over VND21 million (US$974), is recently launched.

“The playground is small but means quite a lot in the densely populated city, with increasingly more public space being used to build shopping malls and roads. We’ll fix the toys and make sure they’re perfectly safe for the kids. I feel much healthier seeing them frolicking around each day,” Van shared.

Within the first weeks of his retirement, he received some hundreds of phone calls and text messages from people who frequent Chuong Duong Bridge- where he was stationed.

They expressed their sadness at no longer seeing him directing traffic flow on and near the bridge and saying hello to him every time they go past him.

“I remember them distinctly, seeing them mature from kids to adults now and changing from bicycles to motorbikes as their living conditions improve,” he shared.

Doan added working as a traffic policeman on Chuong Duong bridge is quite a physical challenge for a middle-aged man like him, whose health is still affected by a wound incurred from his chase after a group of armed robbers in 2005.

“As an arterial route, traffic is invariably heavy on the bridge. The harsh climate also takes its toll on a man my age, as it’s scorching hot in the summer and draughty and biting cold in the winter, especially at night,” he shared.

He has certain first aid skills, such as not carrying pregnant victims, as that may result in miscarriage.

Instead he makes sure the women could stay put safely at the accident site, waiting for ambulances and paramedics to arrive.

Doan also timely stopped those who were attempting to jump off the bridge to kill themselves and patiently talked them out of their suicidal intention.

He still distinctly remembers a girl who he saved.

The girl, who was pregnant then, stopped in the middle of the bridge and refused to leave.

Informed by locals, he promptly rode on a bus to the girl’s spot, as he was afraid the girl might see him approaching her on a bike and recklessly jump off into the river.

He told the bus driver to open the door as the bus was about 5m away from where the girl was standing.

As soon as the door opened, the middle-aged policeman briskly jumped off and grabbed the girl tight.

The girl confided in him that she was regularly verbally and physically abused by her jealous husband, though she was pregnant then.

Doan finally managed to talk her out of her suicidal intention, and told her husband to pick her up.

Several years later, the couple always took their child over to him to say hello whenever they go past Chuong Duong Bridge.

“A small number of corrupted traffic policemen tend to hassle locals. I never received money from traffic violators. For petty violators, I just advised them to adhere to traffic rules next time for their own and others’ safety,” he shared.

Doan was selected as one of the capital’s 10 outstanding citizens in 2012.

He also received a certificate of merit and a medal from the Prime Minister and President in 2013 and 2014.